Remember I promised a beach cover up tutorial? Well its live! Swim over to Miss Katie of Kadiddlehopper and check it out. 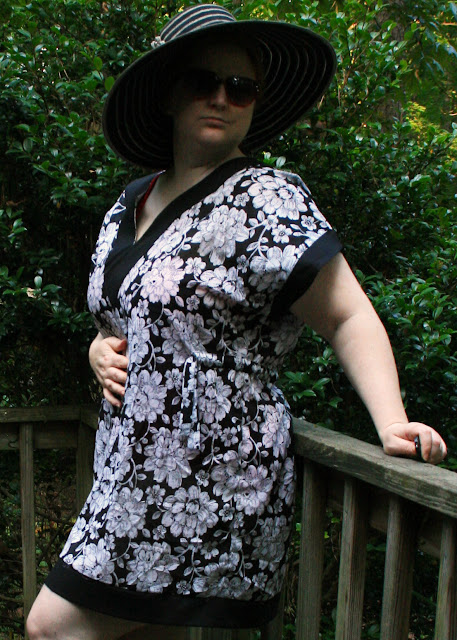 Stay fabulous!
Posted by ladykatza at 10:24 AM No comments: 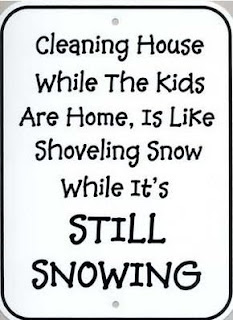 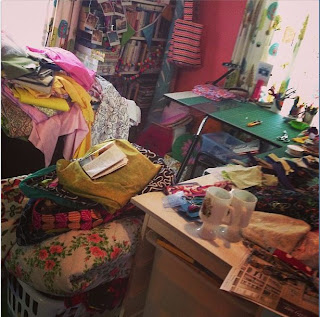 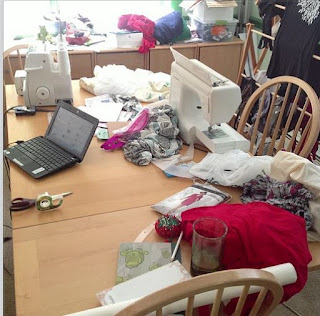 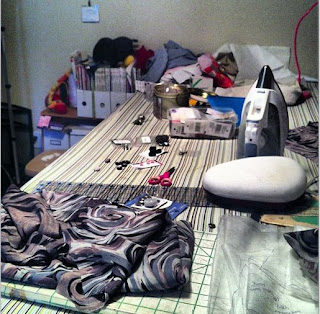 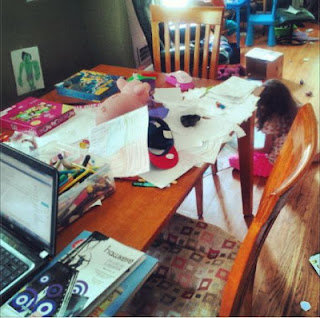 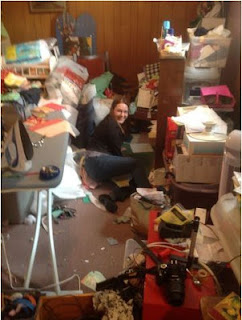 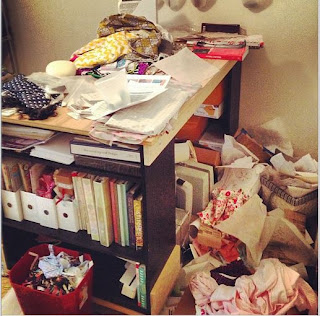 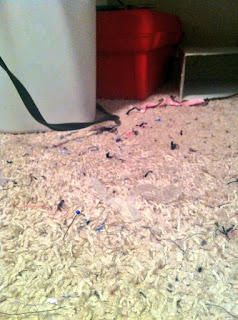 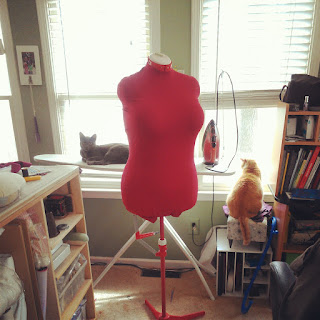 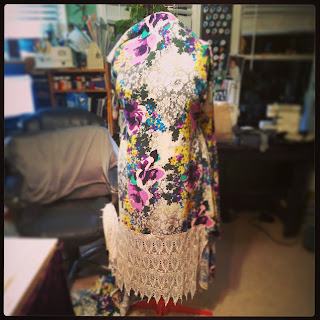 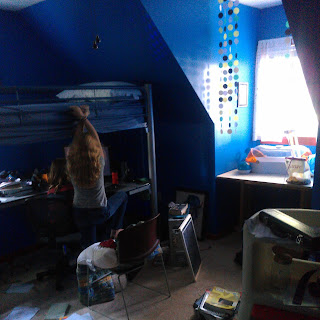 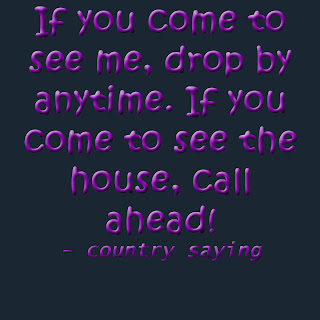 Chipmunks, Toothpicks, and a Red Dress


My weekend did not go according to plan. At ALL. I had planned on starting my Kaftan Beach Cover-up but got sidetracked by laundry, teaching kids to clean, taking my daughter to urgent care, making a red dress, and chasing a chipmunk out the second story window. And not in that order.

I guess I'll start with the chipmunk portion of this, because its rather entertaining after the fact. We have four cats and a cat door, and we live quite a ways out of the city. This means that we get all manner of critters brought in as "gifts".  The problem being, some of them are perfectly fine and get dropped in the kids' rooms. I guess because they think the hairless two-feets need hunting lessons? I dunno.  In any case, we thought we had managed to take care of them all, but when I went into Simon's room I found that his hamster food had been ransacked and was all over the floor. I was like "Did you do this Simon?" and he was all "I haven't been here in three days!". Obviously the hamsters were still in their cage.

So we went back to cleaning and I went back into his room just in time to see the chipmunk jump behind the toy box in the middle of the room (don't ask). I'm fairly certain this is the same bugger that's been eluding us for two weeks now, as part of his tail was missing last time, this time it was healed over. I had Felicity stand at the door and Simon over by his book case. And I tried desperately to corner the little bugger with a towel, a feat I repeatedly failed my dexterity role to accomplish. Every time it headed for the door or bookcase the kids would make loud noises and scare it back to the other side of the room. At one point it even went inside Simon's old computer case (empty) and I was all "TECH SUPPORT CHIPMUNK!". That solicited many giggles. So did the fact it jumped right through my legs three times when I had it cornered.  It was about then I noticed it kept jumping up toward the window from other random things on the floor.  This gave me the brilliant idea to open then window (which has no screen) and then herd it that direction. FINALLY it went for the window again, this time jumping from the little guitar amp, then barely over to the desk where it scrabbled for a hold for a second (while I held my breath), and then WEEEEEEEEEEEEEEEEEEEEEEEEEEEEEEEEEEEEEEEEEEE!!!! out the window.  I stuck my head out and saw it land and run back into the woods. There was much cheering and elation on our part. I can't imagine what anyone happening by would have thought of that. 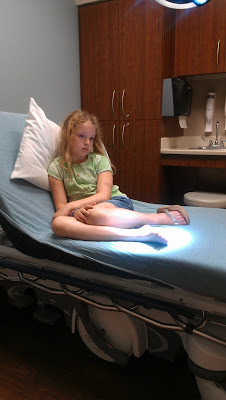 And then this happened. Somehow a toothpick managed to get on the dining room floor and Felicity stepped on it, hard enough it broke through all layers of skin. I didn't realize this until after my MIL and I tried to get out the piece that was stuck in there with a really sharp needle. This was pretty late at night and urgent care was already closed and it wasn't life threatening so we didn't take her to the ER.  We went first thing in the morning. Felicity was a real trooper, even though they had to use double the amount of local anesthetic (250ml!) to numb her foot. Apparently she inherited the "resistant to anesthesia" part of the red hair gene. This is what they cut out: 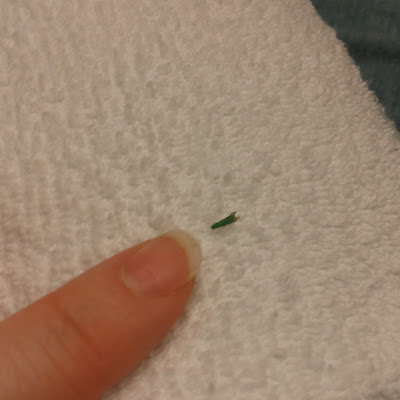 OUCH!  I  would like to mention that we did bandage it and give her some ibprofun before bed and tried to ease the pain as much as possible. Its unfortunate that the way US healthcare works, even with good insurance, emergency room would have been an 8 hour wait + $1500 or more bill, or she could sleep in her own bed and then just wait a few minutes at the urgent care center and I only have to pay $40. I'm gonna stop before I get on that soap box right now, though, because it gets me emotional. In any case, she went to her Grandmother's after we got back from the UC and got lots of attention and pampering.

Saturday was mostly quiet outside of laundry and cooking (I should do gluten-free cooking posts, maybe). About 3:30 in the afternoon I decided to go ahead and cut out another Simplicity 2369 out of the cayenne red bamboo knit I got from FabricMart. I bought it full price when they first came in and I was so glad I did, because it was the first color to sell out. You can get it in other colors here. 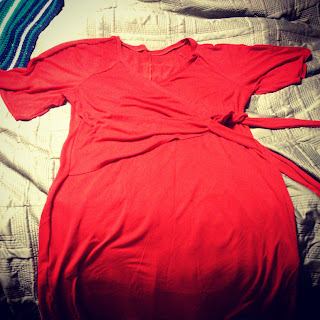 This was a quickie phone photo I took right before bed. I didn't finish until 11pm despite having to be at work at 6am (sewcialists NEVER do that, right?).  I normally can't sleep until about that time on Saturday's anyway, though I'm normally useless after about 8pm. I would not have tried to work on anything new or delicate while that tired. Its a straight size 18 and I only used 3/8 inch seams. Because it was such wide yardage (68"!), I used 1.5 yards of fabric, which puts it at a material cost of about $20 dollars. Four and a half hours from cut to finish, but that's only because I had to re-thread the serger and coverstitch machine twice each, due to order of construction. Remind me to buy more red spools of thread at the next 50% off sale. Though if you look at my start and finish times its much longer than 4.5 hours, but I was also doing laundry.

I'm considering trying out the (american) pant for this pattern. So far its all proving to be well drafted for a Big 4 pattern, so the pant/blouse combo might something super comfy for around the house and errands, without being yoga pants.