Hey, what's up? Did you miss me? I missed me, so I'd be surprised if you didn't. I've been around a bit on social media so you might not have missed me if you are there too. But seriously, I apologize for such a long absence between blog posts. You see, I've been fighting my brain chemistry a good bit lately* and blogging was not high on my to-do list whilst trying to sort it out. But here I am and I want to tell you about something fun going on.

The Summer Swim-A-Long! Like many things, this started out as a twitter conversation and kind of grew into a full fledged theme. Its kinda like a sew-a-long but with more options than just swim wear. Like, I'm going to be doing a guest post over on Katie of Kadiddlehopper in mid-June for a beach cover-up how-to. Just a few days after my birthday. The lovely Leila of Three Dresses Project is co-host of this affair. 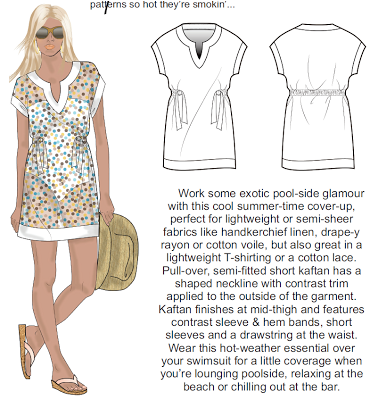 The beach cover-up I'll be making is a free download at fabric.com, you can find it here. Click on the banner that says "free pattern" and below are links to suggestions of what to use for making this cover-up. Which will henceforth be called "The Beach Kaftan". I recommend semi-sheer or sheer materials that can withstand beach, sun, and the washing machine. Cotton voile, gauze, and even chiffon if you are feeling froggy, but I recommend easy to work with fabrics.

I've already dabbled a bit in making a swimsuit for my daughter, the above is my first attempt. I really want to make a slightly better one with latex elastic around the neck so that it doesn't pull down so far on her. I ordered some more and it came in the mail yesterday.  In any case, we've been quite excited for summer since all the rain this winter has the lake fuller than it has been in the last decade, AND my mother-in-law's pool is now operation again. I fully expect my children to develop gills and webbed feet by the end of summer. I'll keep you posted on how that goes.

Speaking of lakes, I want to make surfer suits for the kids to use while skiing. So what fun activities do you northern hemisphere folk have planned?

*By "fighting my brain chemistry" I mean I had yet another complete meltdown at which point I threatened to euthanize all the cats. I may even have threatened my husband with a knife, but he says that I didn't so my memory could be faulty. Or I just thought about it (but really, who doesn't entertain that notion once in a while?). In any case, these episodes were getting to the point where even I was like "WTF is wrong with me" and finally agreed to see my doctor. We've adjusted my medication and we'll see how that goes. So far, so good.

Sewcialists, We Have A Winner!

Thanks to everyone who visited the jury blogs to cast your vote. We had a total of 191 votes. That's wonderful! I know it doesn't mean we had 191 individuals voting but it's still nice to see that a lot of you voted multiple times. We appreciate you taking the time.

Thanks to Make Magazine the winner will get:

Thanks to individual donors (this is not coming from Make: Magazine), the winner will also receive:


And the winner is?!
JOOST!

A big congratulations to Joost* and all designers for their hard work.

What are you going to do with our new Sewcialists logo? First, head over to Joost's site and choose your colors. I totally did this already. You should see the new logo on my upper right hand of the blog. Click on it and you'll go to our sewcialists.org site. There's some background ideas kicking around with what we would like to do there to make it a social site. Stay Tuned!

Now, what to do with your customized logo? Well, some ideas:


What shall you do with our shiny new logo?

*Joost asked that we donate the money to a charity. We decided on Boston and Bindis, which you may have heard about from Madam Oona. If you feel like it, its a worthy cause.

You know, its kinda hard to sew for boys. I mean, the pattern options are very limited and while you could probably find some cool vintage patterns there's no guaranteeing that your boy will wear them. While Simon loves his WoW shirt, he doesn't wear it often because its a button down, and that's too fancy for school.

So, I asked him what kind of shirt would he actually WEAR to school. He says "NARWHALS!" (do a google search, they are a real thing). So I pulled up Spoonflower and did a search for narwhals. There are way more options now than their used to be. But at the time we settled on this one:

So for the shirt I used a vintage 70's raglan t pattern. Sorry, no link at the moment. When the fabric came it it was much more purple than expected. Which was fine, cause it matched his stuffed Narwhal I got him for Christmas. 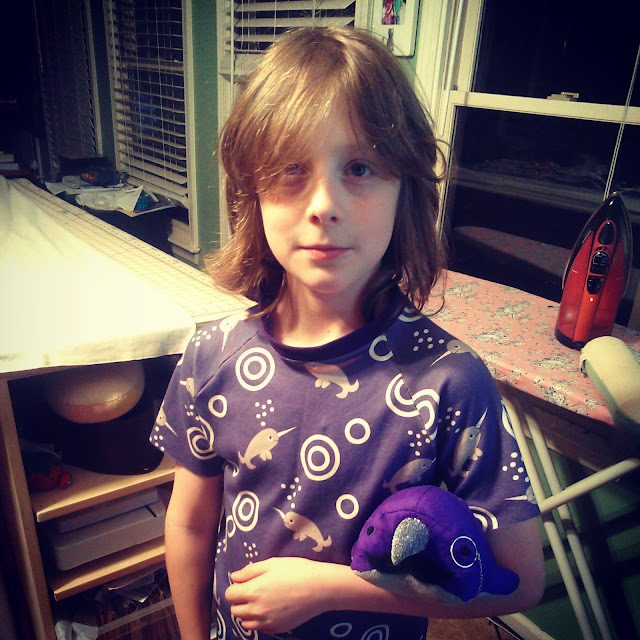 This was the "try on" phase, complete with Dr. Dandy (cause he has a monocle and mustache). I was apparently not fast enough because he promptly ran upstairs "for bed' and then wore it to school, and then Grandma's cause she picked him up before I could pry it off of him. Once I finally got it back it had to be washed. Cause woof... boys are stinky. I added contrast bands to the arms and then self fabric to the bottom. Both needed more length anyway. 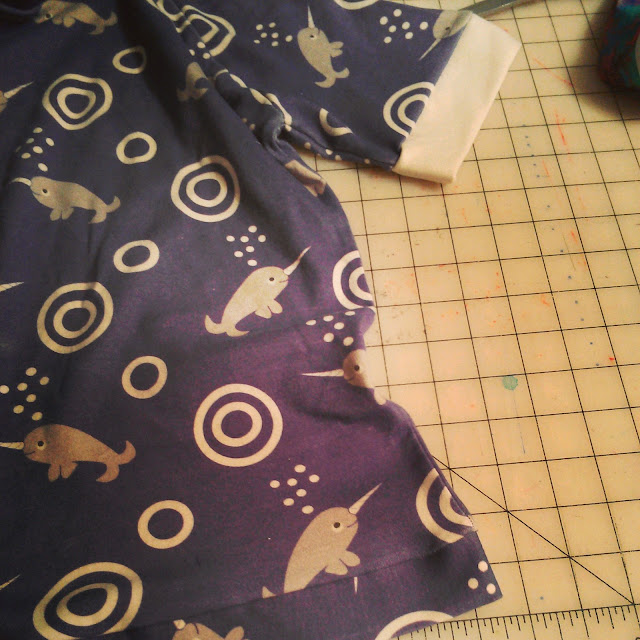 As an aside, Spoonflower's organic cotton knit is amazing and worth the price. The only thing I can complain about is the fading of dark colors. 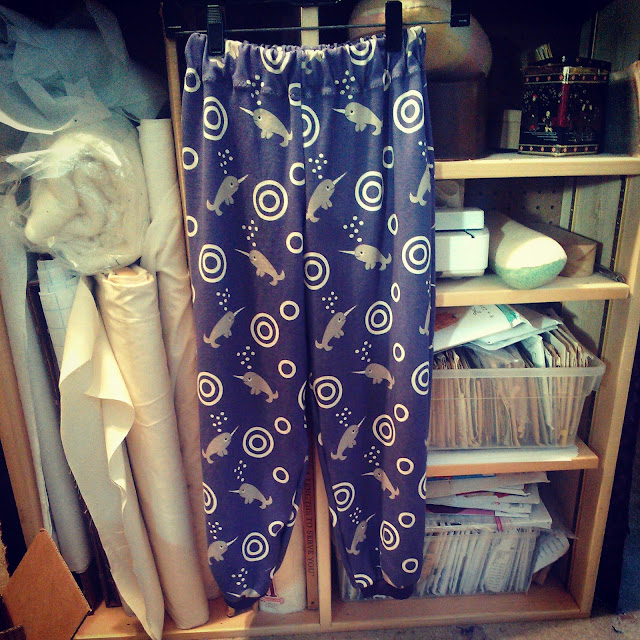 Later I made a pair of sweatpants. I'm glad construction of these are fairly straight foward because I'd had a pretty epic meltdown after finding a dead chipmunk in the kids' rooms. That's one in each.  OHGODEEEWWWW.  There was a lot of screaming and yelling about the state of their rooms, making the kids cry, my husband fairly silent and "helping" them clean* and my roommate left the house. My roommate never leaves the house.

All that to say, I constructed those bad boys while heavily medicated. If this were a game I would have gained a skill level.

And, thanks to the wise words of Twitter Sewcialists, I saved the next thing for later. 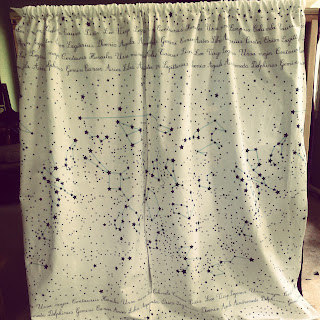 Constellation curtains!  This fabric is the perfect curtain fabric. Seriously. The designer really thought this through. Again, spoonflower, and you can get this here in two colorways. These were also super easy. I uses every single bit of this fabric, NO WASTE!  And because it was such an easy project I decided to use some glow-in-the-dark fabric paint I had lying around to paint the constellations themselves. 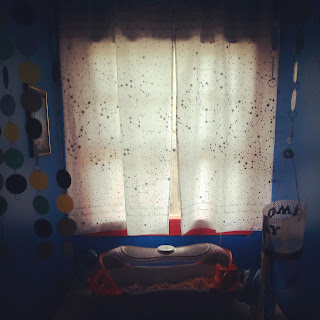 This is the nook, where we just turned the old fish tank table into a hamster table. Next up is covering it with some vinyl for easy cleaning.

All these things seem to have made Simon a very happy kid. I could tell that he was feeling left out with the amount of things I make for Felicity (because.. hello, girls clothes! Seriously, this is why defining what we can wear by gender needs to go away).

So, that's that. I think I'm done here, but gotta go tally up the Sewcialist votes. Tell me, what do you sew for boys?

Oh, and before I forget, here's the Narwhal Song.


*Clean is a somewhat relative term here. We actually did a lot of cleaning this weekend but you can't tell because the living room is currently the laundry staging area and the carpet looks like it hasn't been vacuumed in weeks. Except it was vacuumed four days ago.
Posted by ladykatza at 8:19 PM 8 comments:


I really must sing the praises of this blouse. Vogue 8747 is from the "Basic Pattern Custom Fit" line, and I think I'm in love with these. Its built on their standard block, with most of the bust adjustment done for you. The two major changes on my part were large upper arms for the sleeves and rounded upper back adjustment. This is my second make. I also did a plain black one, but did not photograph it. 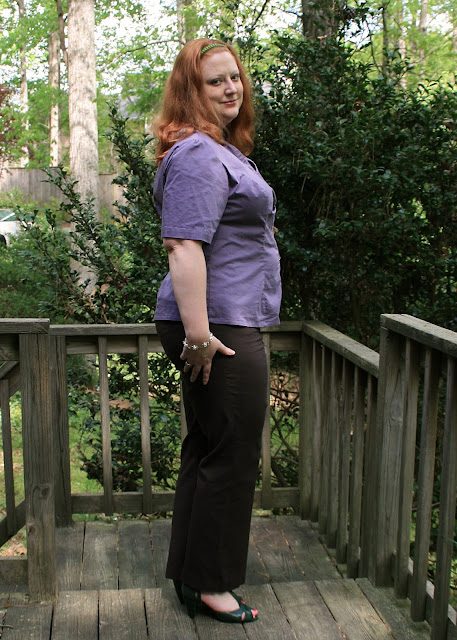 These trousers were given to me by a friend that had lost a great deal of weight after surgery. I love them to bits but they are getting kinda threadbare. I will probably use them to help draft a new pair. 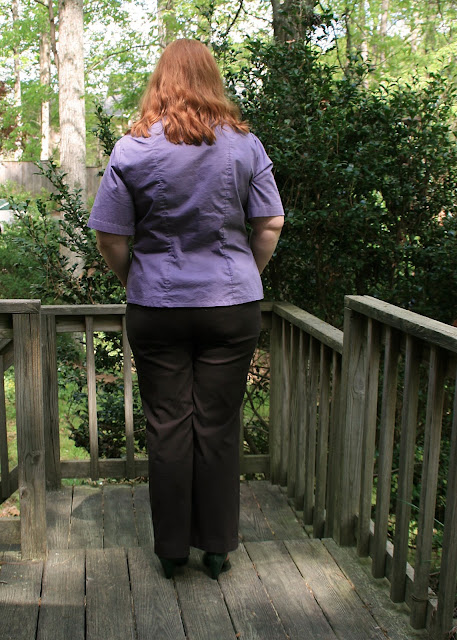 I also really like how this goes with my floral bolero. 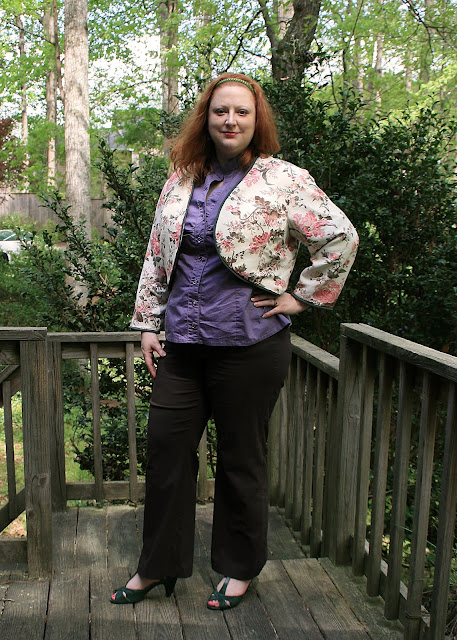 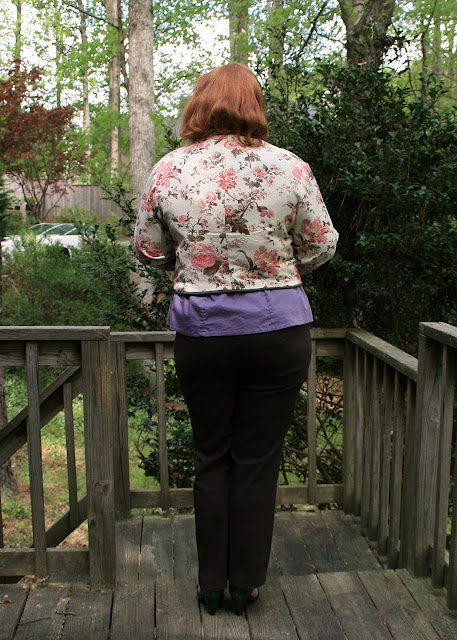 Hmmm. Hair stuck under the jacket. My mojo seems to have taken a hiatus. I did make a raglan t-shirt for Simon out of narwhal fabric, which he quite loves. I still have to finish it. I want to make a skirt or two for work then get cracking on my raincoats. 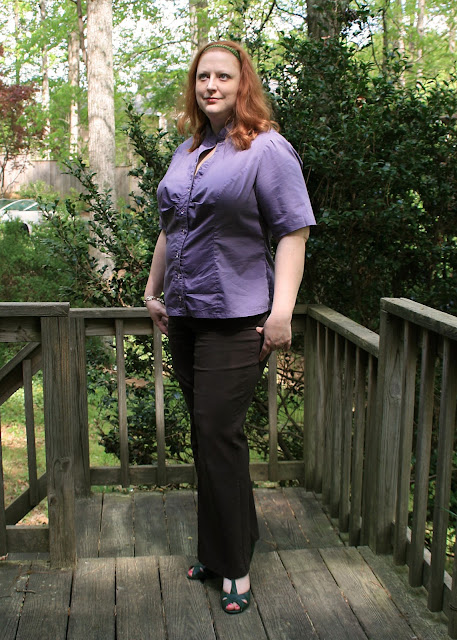 At the Challis Chalet, You Can Check Out, But You Don't Have to Leave

Hello you fabulous vacationing sewcialists! I hope you've had a lovely stay here. I know this was a loosely organized focus month that was mostly to put you at ease working with a different kind of fabric. I don't have too much to say today, other than I was happy to have as many of you as I did. I'm posting makes from the Flickr group and if I've missed you and you want to share, please add a link in the comments below!

Please don't feel like this is over. The Chalet is always here when you want to visit. I love this fabric and I hope you do too, now!

First up, the Fabulous Katie of Kadiddlehopper. That woman has some serious sewing stamina. I have no idea how she does it. Here she made a lovely bias cut top and a wrap skirt. Faboo!

Oh Carie, you were after my heart here. Of course you deserve a cocktail! A 90's slip dress? A fabulous print skirt, yes please! And check out here blog to see all her fabulous other makes.

Gillian of "Crafting a Rainbow", after my casual heart. This is the perfect little top for a hot summer day running errands or reading while surrounded by furry friends. Of course she's got plenty of other lovely makes on her blog, and she may even challenge you to a sewing dare!

Last but certainly not least, Miss Devyne. She refashioned an old skirt into a top. Its the perfect little bit of over the top to go with those purple jeans and her fabulous personality. I can't believe I went this long in the blogosphere of sewcialists without making her acquaintance.  This is a good top for the Arizona springtime, for sure.

Now, please don't forget to vote for your favorite #sewcialist emblem, and join in on Katie and Leila's Summer Swim-a-Long. I'll be guest posting!
Posted by ladykatza at 12:49 PM 2 comments: