New Toys and Past Lessons Remembered

Let me back up a second though and give you some photos. I finally decided to go with this one after pondering it for some time because of Caroline's one year review. Its a Janome 8900 that I bought from Ashby Sewing during their annual Sewing Expo sale. If you live in the Atlanta area I HIGHLY recommend them, especially for getting your machines serviced. The guy that does the work is recognized nationally for his expertise. 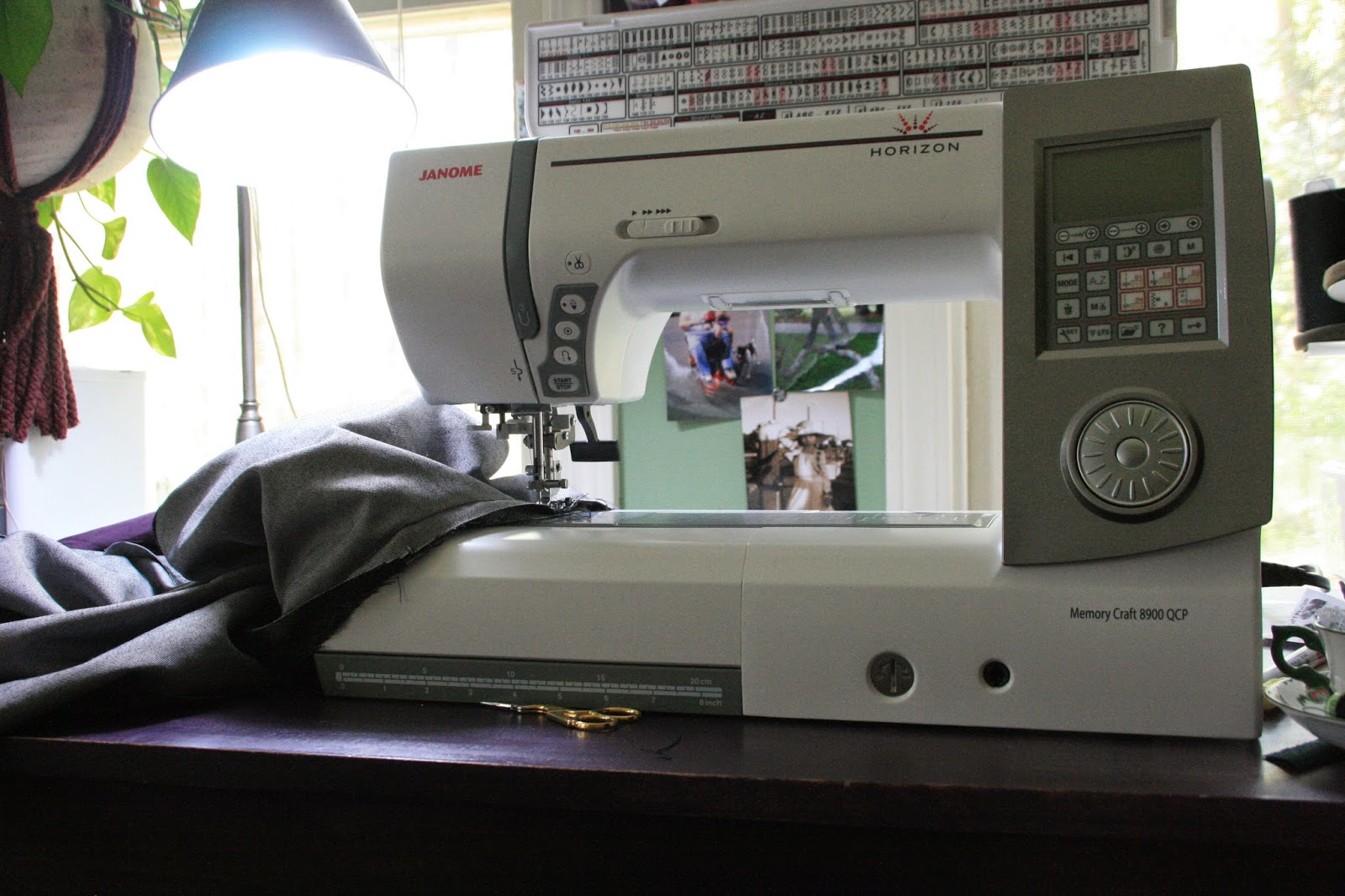 At this time I don't have a special table that the machine sets into, this is one that husband and brother in law built for me. Its very sturdy, just like this machine. Full speed and everything in the sun room vibrates, but you can barely hear it, which means I can sew when my husband works from home. SCORE! I decided to not install the knee lever because I'm more likely to injure myself on it than find it useful. For whatever reason my hips are always larger than I think they are, come to think of it so are my bewbs. I run both into door frames ALL THE TIME. 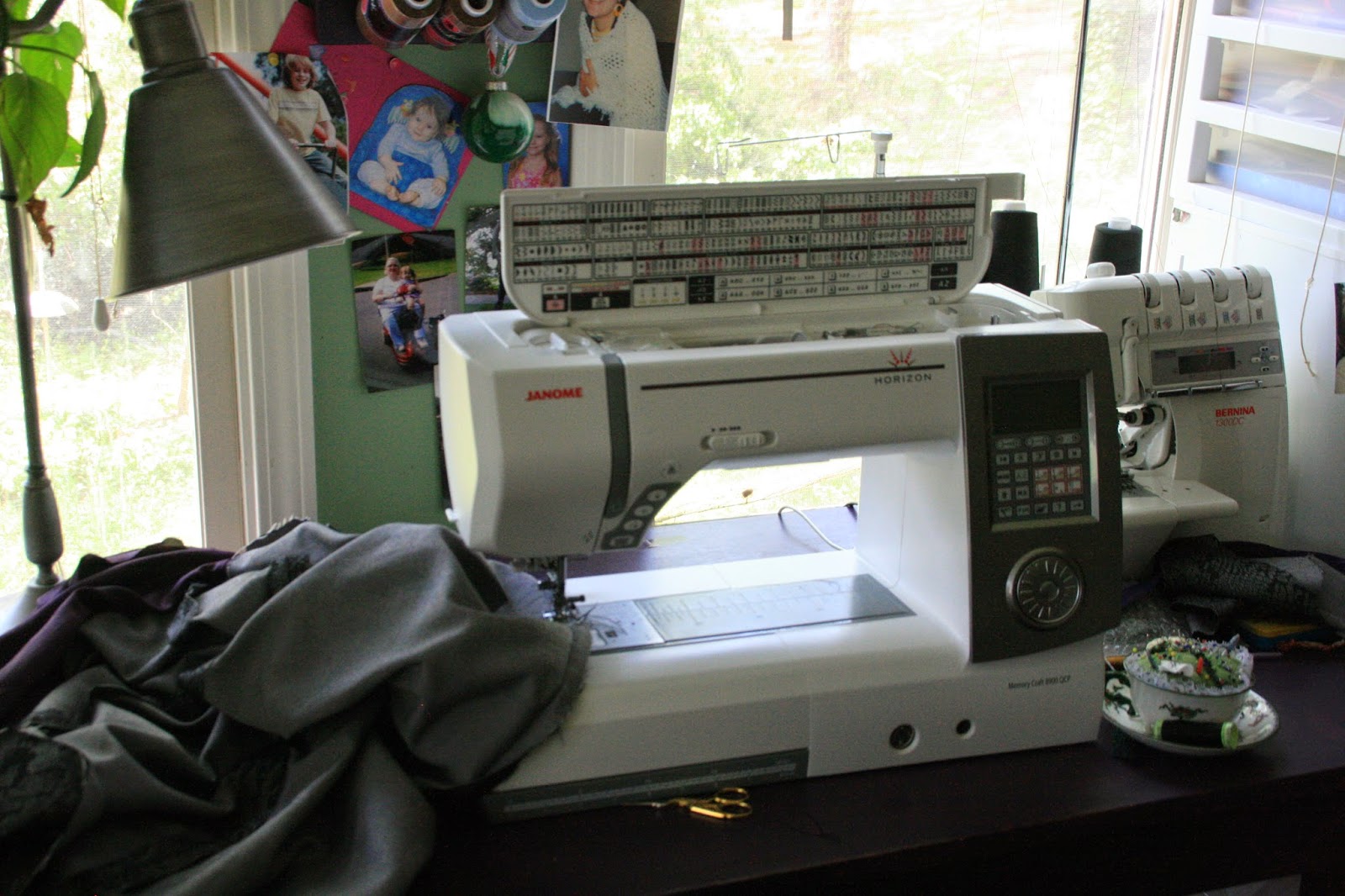 So as you can see this thing is huge. Lots of stitches, lots of carriage space, and I even got the extra spool holder for my larger thread spools. 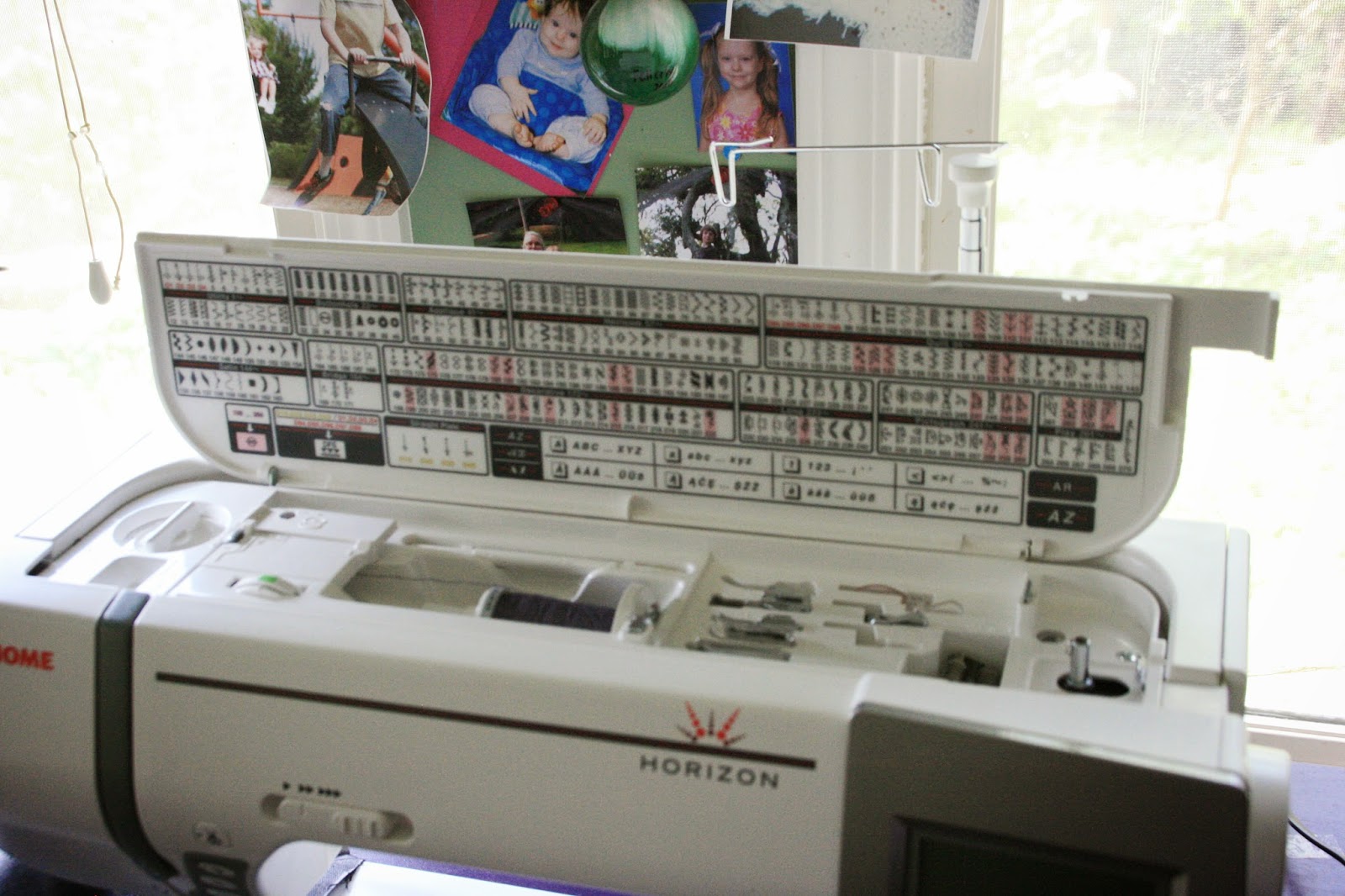 One of my more favorite features, slots for the most used feet! The tension is automatic but has an override button and there's a walking foot in the storage container at the bottom (not pictured) along with bobbin storage and even more feet. When I was checking out they asked if I needed more bobbins.

"How many are in a package" I asked.
"Ten" she said.
"I'll need two then" I said
"What in the world are you sewing!!" she exclaimed.

Apparently quilters don't switch bobbins out that often. I know I need a black, red, and blue wound at all times, and really several other colors. Or two of one color if I'm working on something with lots of stitching. I don't know about you but I hate stopping to wind a bobbin, so lots of bobbins it is! Oh, and it takes standard needles so I didn't have to rush out to buy more. In any case, I love this machine to bits.

But lets go back to about this not being my first rodeo when it comes to financing. We bought our house back in 2002 before the prices skyrocketed but the regulations for financing had begun to loosen up. This was also before the bottom dropped out of the tech industry when outsourcing became the norm. I had done a lot of research and when we chose the house we chose one that we could pay on one salary, despite it being a tiny house. This turned out to be a decision that saved our asses. Even so, what happened to many in 2008 happened to us in 2004. One or both of us were out of a job at any given time for several years.  During that time I was staring down the long road of possible foreclosure and lots and lots of credit debt. We did the credit consolidation, we liquidated all our retirement funds (what little there was), we had to turn to friends and family. This was a time of hardship for us but we made it through. A decade later we both have steady jobs (queue superstitious knocking on wood) and our credit has been repaired. We have, on several occasions, used the X number of months no interest financing. These are great deals, and how I financed my new sewing machine. THE TRICK, however, is to be absolutely certain you are never late on your payment, because then they charge you an obscene amount of interest. And the laws being what they are, they will then share that information with all the other credit companies and they will jack your interest based on that one card. And if you overpay it goes toward principle, not the next month's payment.

Its a racket.  Its a racket I would not gamble with unless very certain I could do the monthly payment on time. When I financed this through Ashby they made sure to tell me this all up front before I sign the documents, which I thought was amazing. Most places don't, but I already knew because, well.. been there, done that.

I know that was long winded and maybe a bit off topic but I believe in sharing knowledge, be it how to do an FBA or how to keep from getting scheistered by credit companies. Got any nuggets of wisdom to share?
Posted by ladykatza at 1:35 PM 11 comments: