Check Out These Tags I'm Poppin'


So I posted this to instagram and facebook a few days ago and got lots of positive feedback and questions. Which, AWESOME!! I love them too. I've started going back and sewing them into my clothes, but started with what I finished this weekend.

I keep promising actual real photos of what I've been making, haven't I? *sighs* I'll get to it, eventually. So lets talk about the labels, which is the main feature. The design itself was made by a friend of mine, Jason, who is a graphics designer. He's currently without steady work, picking up contracts here and there, so any business I can send his way would be awesome. as you can see, he does wonderful and subtle work. Email me ladykatza (at) gmail and I will introduce you.

The second bit is where I had them printed. I actually found this Etsy shop through another blogger whom I cannot remember at this moment  you can find here at The Seeds of 3.  http://www.etsy.com/shop/ananemone  is the shop storefront and you can use your own label (which you send via the Etsy message system after you agree to pay) or you can use her art. She has both iron-on and sew-in tags, and from personal experience the sewn in ones are not scratchy at all.

I don't know why setting up my dslr and taking photos of my makes has felt like a tedious chore of late. Cause once its done I have lots of taking and editing the photos. So I'm going to give you a sort of high level overview of things that have been going on.

So, y'all saw the photos of Felicity in my raglan skater hack dress. I finally got around to tracing out and doing one in my size, with no modifications other than grading from a 6 in the bodice to an 8 in the waist. This is the trial run, fabric courtesy of Oona. 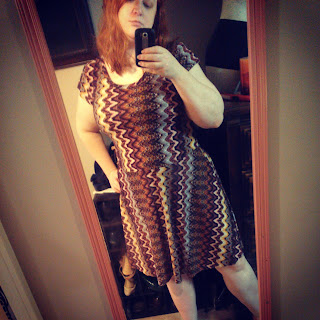 I completely failed to match up the stripes, but I'm OK with that. I decided I didn't like the cap sleeves AND they are a bit tight despite being knit. So I modded the pattern to have elbow length short sleeves that fit my Brunhilda biceps and a "cheater fba" that Miss Katie blogged about. Which was awesome because then I dragged the family and all my sewing stuff out to the wilderness and taught D and her sister S to make LadySkaters. D also needs FBA, but she doesn't have Brunhilde arms, so large arm adjustment not necessary. And I finished my static dress for Dragon*Con (post to come).

So that was all awesome and good and then my car blew a gasket on the I-285 north side. In the middle of construction traffic. At 9pm at night. And AAA said they couldn't get to us before midnight.  Which put us down BOTH cars and we both had to be at work at 6am Sunday morning.. I worked two 12 hour shifts from home on less than five hours of sleep (in a 48 hour period) and called in sick Tuesday because my body threw a hissy fit, and my husband had to use my car to get to work. The car fix was cheap but that cost me a LOT of "spoons" in energy.  I did go into work on Wednesday and xanax is the only reason my coworkers lived through the day.

I slept in on Thursday, and then I made my last video post. Which, btw y'all. THANK YOU. I mean really. Your words of support and the fact that I may have helped others cope means that world to me. I cannot even explain. You're all awesome and beautiful people. 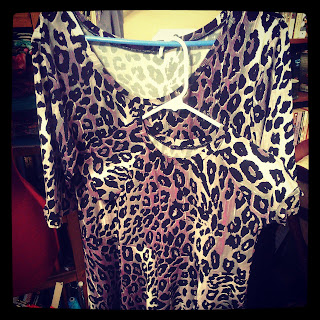 And because they were already cut out, I made matching skater dresses for Felicity and me that Thursday. Next photo shoot, D*CON costume, one after that, mother/daughter dress photos. I think I'm also going to do a post on "What to Wear to an MRI" (not a joke).

Oh hey, remember the Tofino's and the swatch in one of my videos? Yup, totally made that. Here's crappy selfie with gratuitous belly button and stretch marks (or as husband calls them "lightning scars", cause I'm awesome and gave birth to a mostly hairless bi-ped. Two of them, but not at the same time.). By the by, double gauze is YOUR FRIEND if you live in hot humid climates. I officially want three dresses from the stuff for outdoor activities. Like Ren Fair or craft shows. For serious. 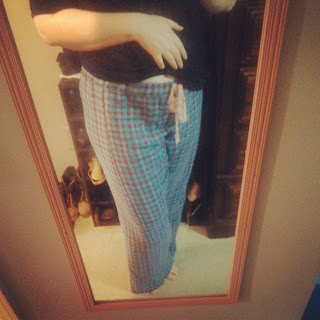 And HERE is my ripping off Heather B and making a LadySkater t-shirt*. Now I want one in every color.

To be honest though, that is a really bad representation of the red. Here, have a better one from my new webcam. Its the "Cayenne Red" from the bamboo knits Fabric Mart got in sometime ago. I bought it full price because I was certain it would sell out quick. It did, like  it was gone a month before it went on sale. I snagged two other colors on sale though. This stuff is amazingly comfortable.

Oh, that brings us up to what I'm currently working on, which is fitting the Hawthorn (4 hours so far) and working on the Hummingbird skirt. I've traced out both views.

I did decide to do a wearable muslin out of the same turquoise denim that I made my latest pair of Clovers from... and I just realized I haven't blogged about that either. Sheeit, I'm just all kinds of slack. You still love me, right??

Oh, what's missing here is the forward shoulder adjustment. And the Brunhilde Arms adjustment I did to the sleeves. I ended up adding 2 inches in diameter for the sleeves to fit around my biceps.  The one nice thing here is I don't think I need a rounded upper back adjustment. I don't have the web-cam fitting photos with me. 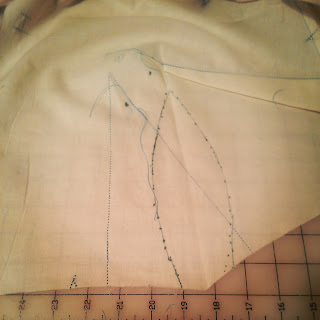 Here's the markings that I change on the muslin. 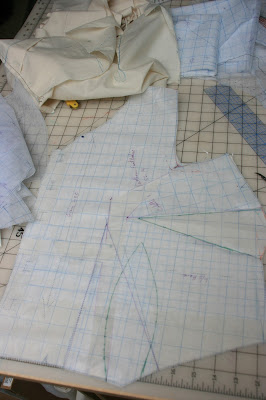 And here's where I transferred to my already poor Frankensteined pattern piece. I traced out a new one, I may move the bust dart over later, I dunno. But that's it for the Hawthorn. I did cut out a blouse version from Fabric.com's solid rayon challis collection called "darkest navy". I hope I did the sizing up on the peplum correctly.

So that's all the randomness for now. For the finally I give you a sneak peak of the costume I will photograph sometime in the undisclosed near future. And yes, I really was that pale.

Love ya, Mean it. xoxo

* I had some sort of interesting footnote to put here but I forgot what it was. So um... KITTY!
Posted by ladykatza at 4:35 PM 4 comments: