Remember back in school when the teachers would have you write an essay on what you did during the summer? I kind of feel like I'm about to write one of those now but I'm only a month into the summer school break. Remember that cruise I mentioned? Yup, that was awesome. It was also almost three weeks ago but I didn't get any of the actual wedding photos until today. Its kind of hard to take pictures of yourself when your job is moral support for the bride. Not that she needed much, its the happiest I've seen her in two decades.

It was a lovely wedding and a lovely vacation. The wedding was during our first stop in the Grand Turks, it was just family and best friends there, most of us were actually in the wedding. We'd had no rehearsal or anything like that, and seeing as it started at 10am we'd all managed to forget to eat. Which made cocktails at 11am extra fun. The food was amazing. It was sushi and other hors d'oeurves, and an entire section of gluten free, including cake. I had two pieces of cake because I NEVER get cake anymore.

I'll be honest, when I saw the photos I freaked out. I was like "I am not that wide!!", and then proceeded to have a melt down over my weight.   Then hubby pointed out they used a wide angle lens. Ug. Oh, and Dreama is the same height as Felicity when she's not wearing 5 inch heals. So I'm like a giant compared to all the other women. Or a Viking. Let's go with Viking. 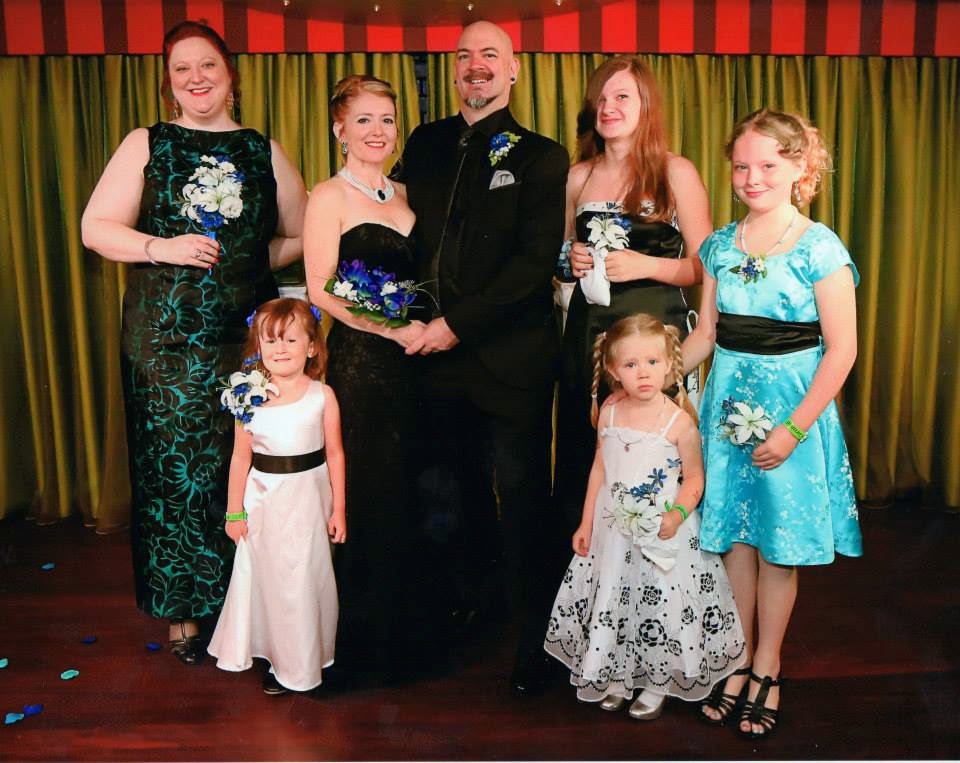 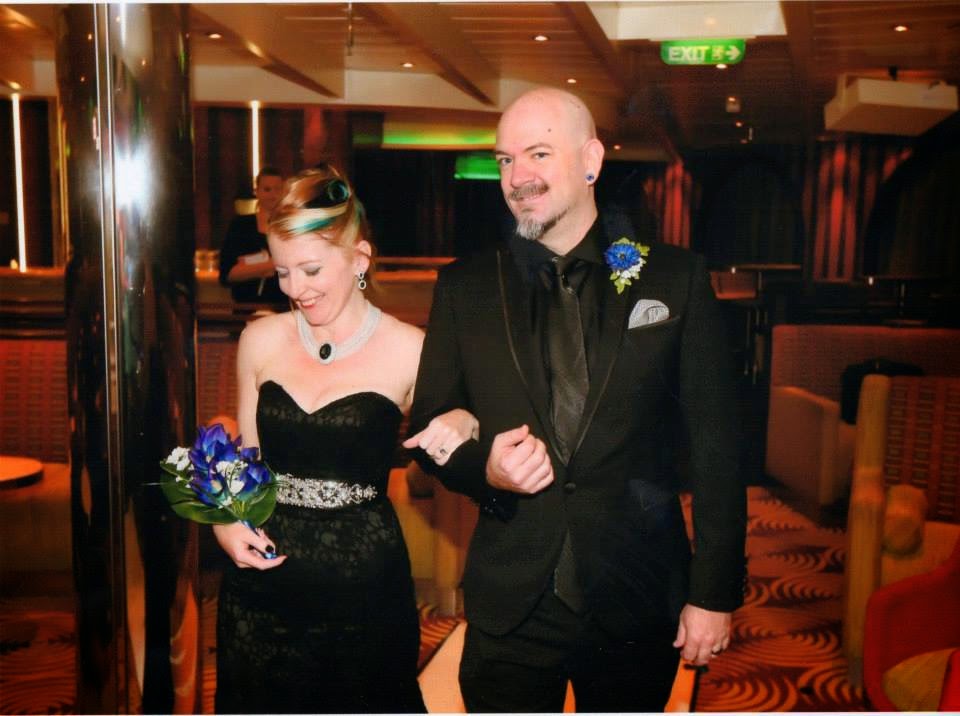 The Soon to be Mr. And Mrs.  Of note, the necklace and earrings are my Mother's. She loved Dreama very much and so Dreama wearing her jewels meant she was there in spirit. 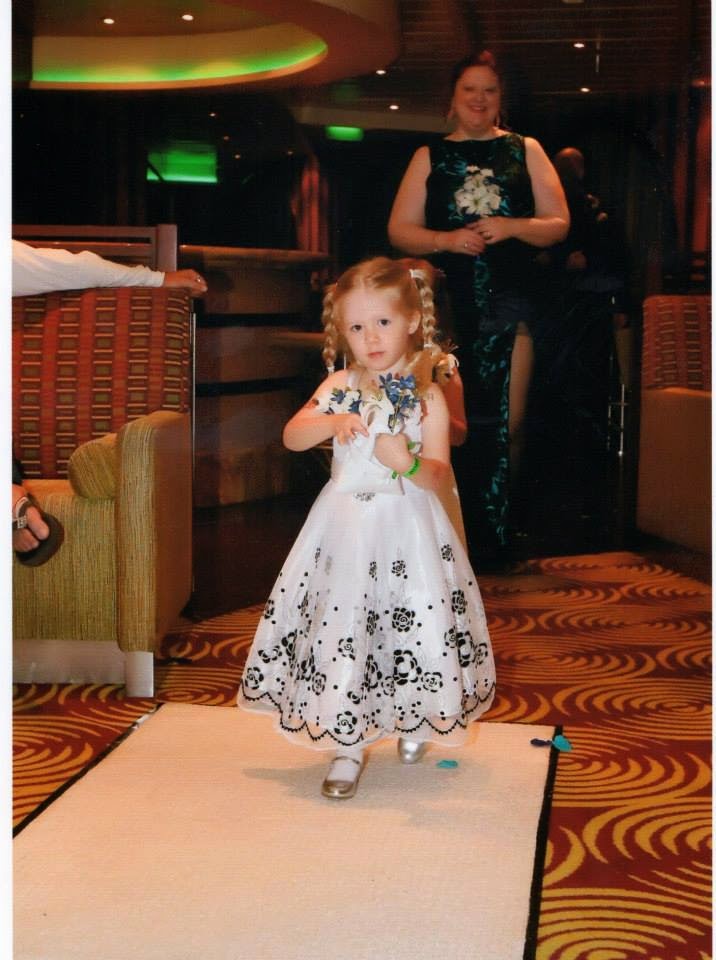 This adorable little girl. She and her cousin were very serious about their flower girl duties. Later she also decided my arms are the best thing ever. She'd crawl up in my lap all during the cruise and hug them and go "squish squish squish!" and then blow raspberries and giggle over and over.  Its kind of hard to hate a part of your body that gives three year old girls that much joy. 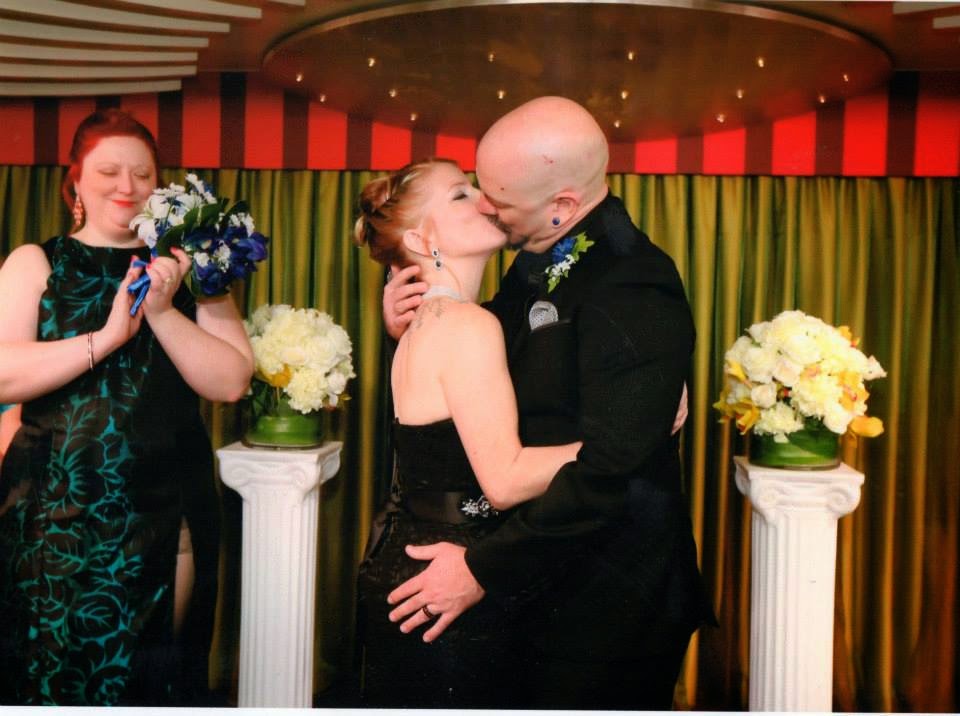 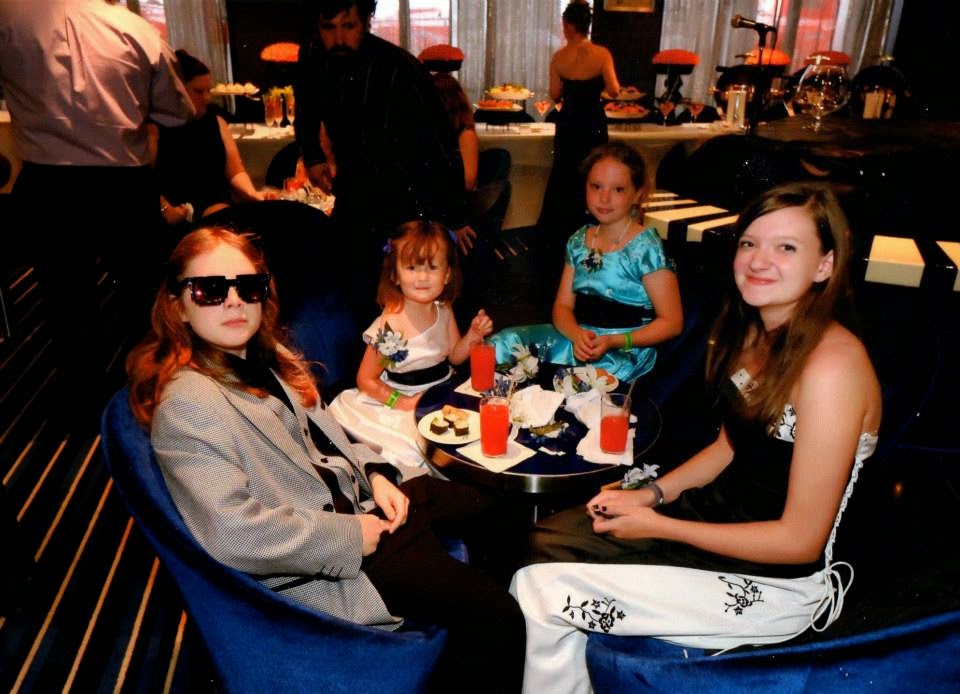 Let's not forget about Simon. I couldn't make him a suit so I had him pick one out from the Easter day ZuLilly sale. I was like "really" and he said "really".  I had to hem the darn thing up like 10 inches (its a size 12 for boys!!) and he was just the coolest mac daddy around. 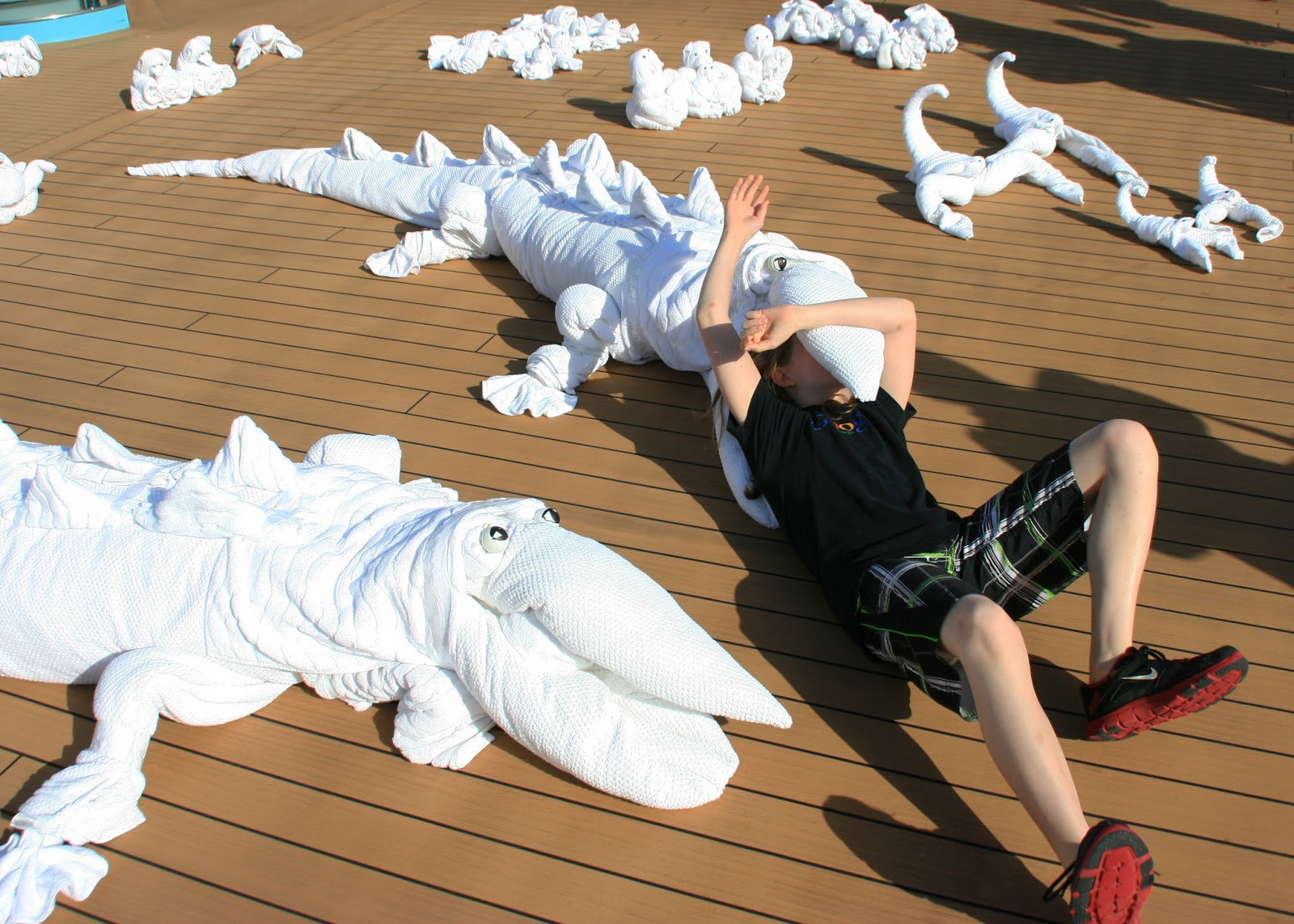 So after the wedding we still had six days ahead of us!  Its honestly the best vacation I've ever been on because I didn't have to do one lick of cooking or cleaning. The next day was St. Thomas and when we all woke up and headed out to the Lido deck the entire thing was covered in towel animals. It was AWESOME! Except the part where Simon almost got eaten by a fuzzy alligator. 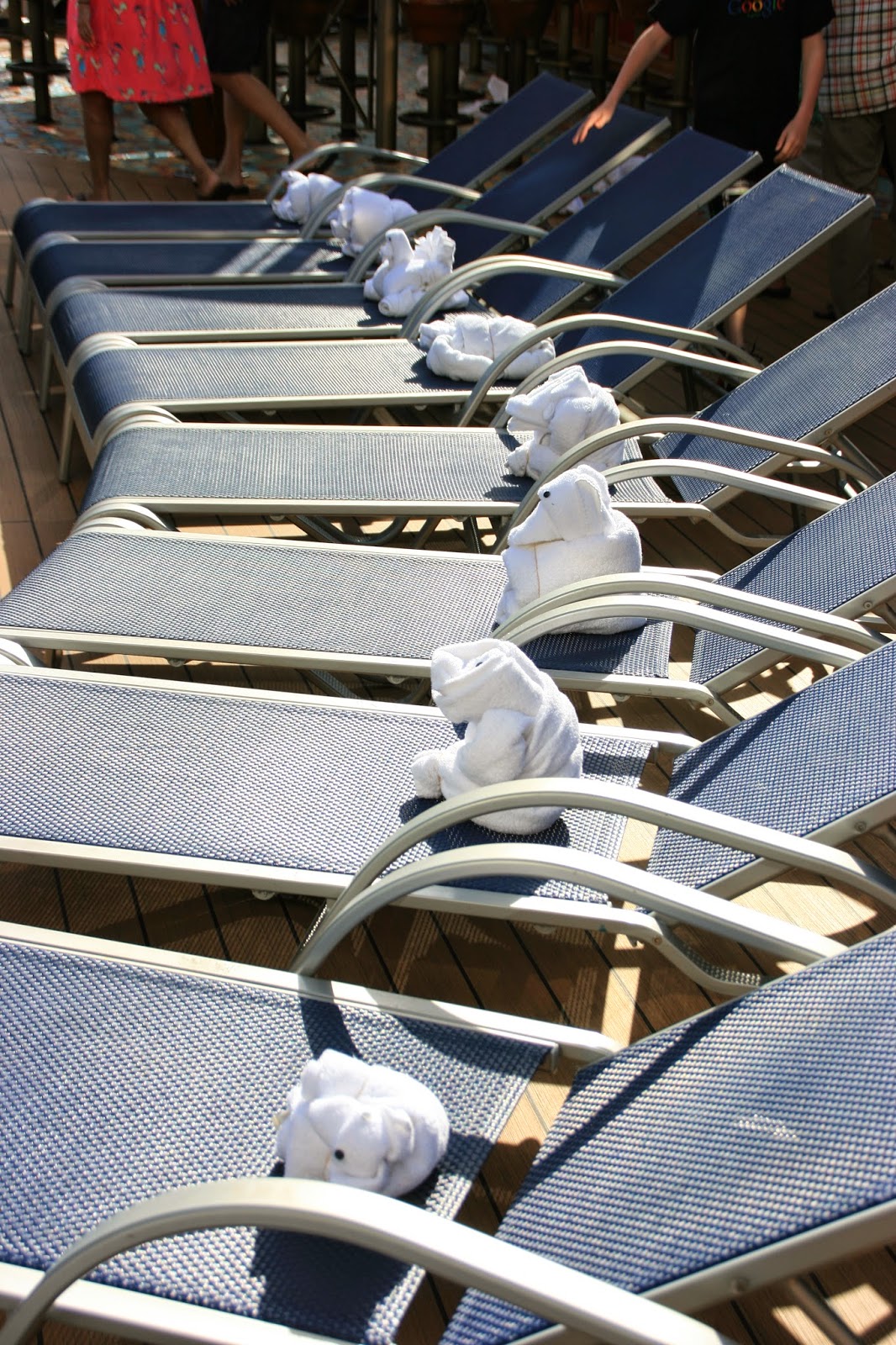 Baby elephants love to sun in lounge chairs.  I don't have any photos of our first trip onto the shore, I just didn't feel like lugging around my dslr. 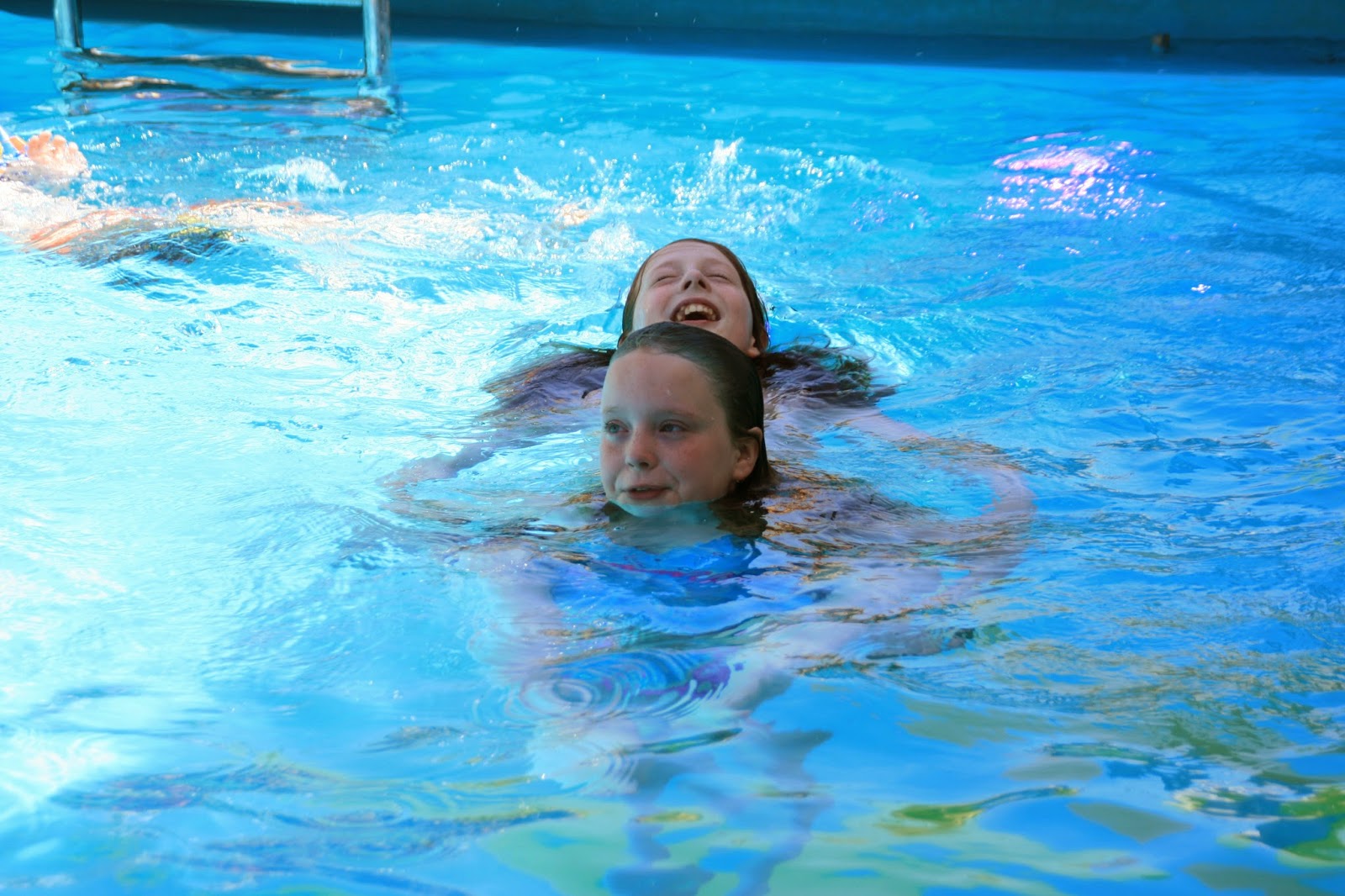 Simon and Felicity swimming in the Lido deck pool. 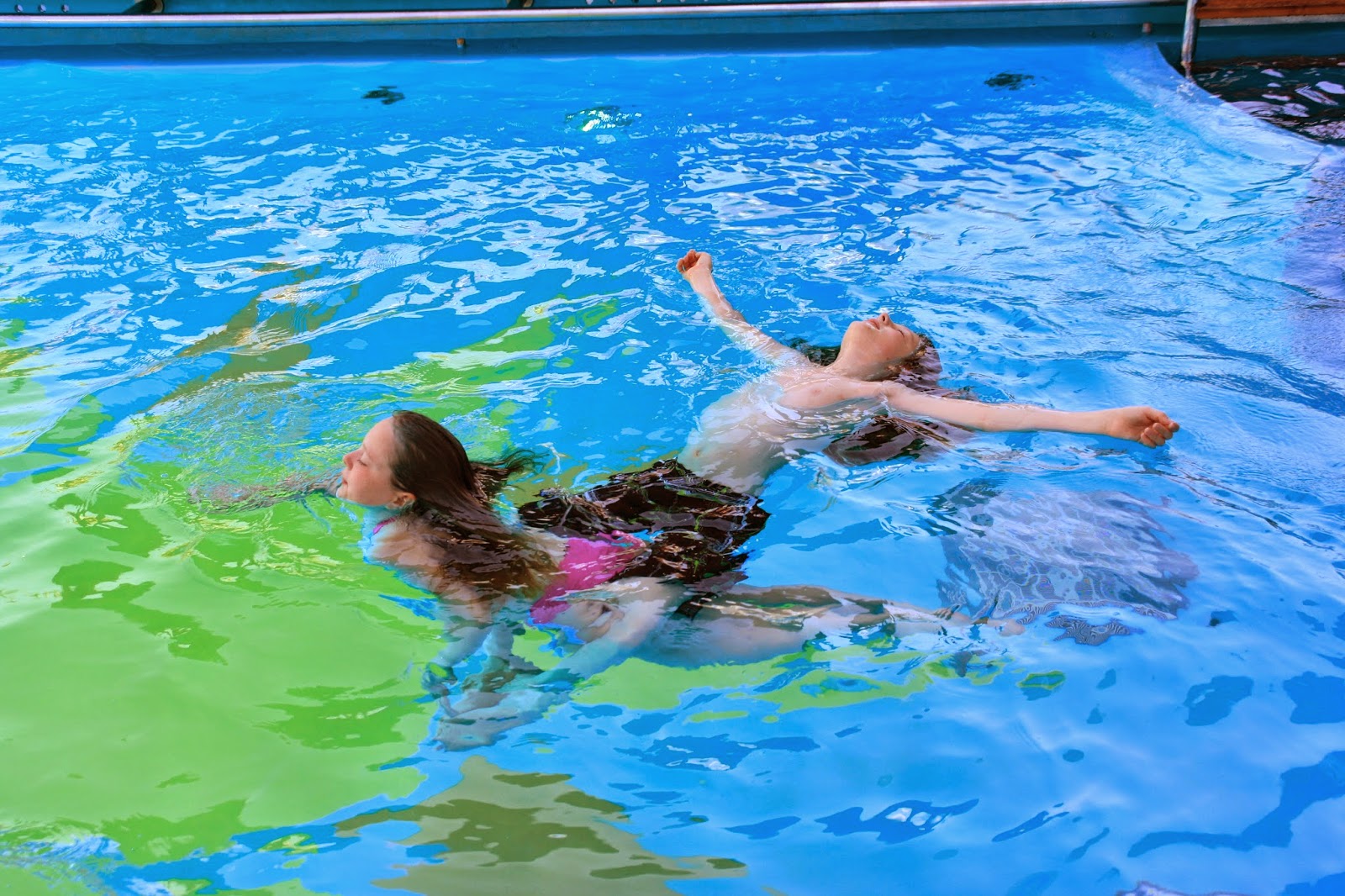 Our next stop after a day at sea was Tortola, where we got to swim with dolphins!  It was also Felicity's birthday, and since Dreama and family were going on a deep wreck dive their niece wasn't old enough to go (that entire family is scuba certified).  So after talking to Cass' grandparents she came along with us. Again, no DSLR and the photos they took during the swimming with dolphins were not great AND 35 dollars FOR EACH PHOTO. OMG, I'm still mad about that racket. I got one cell phone photo of the three, with dolphin photo bomb. 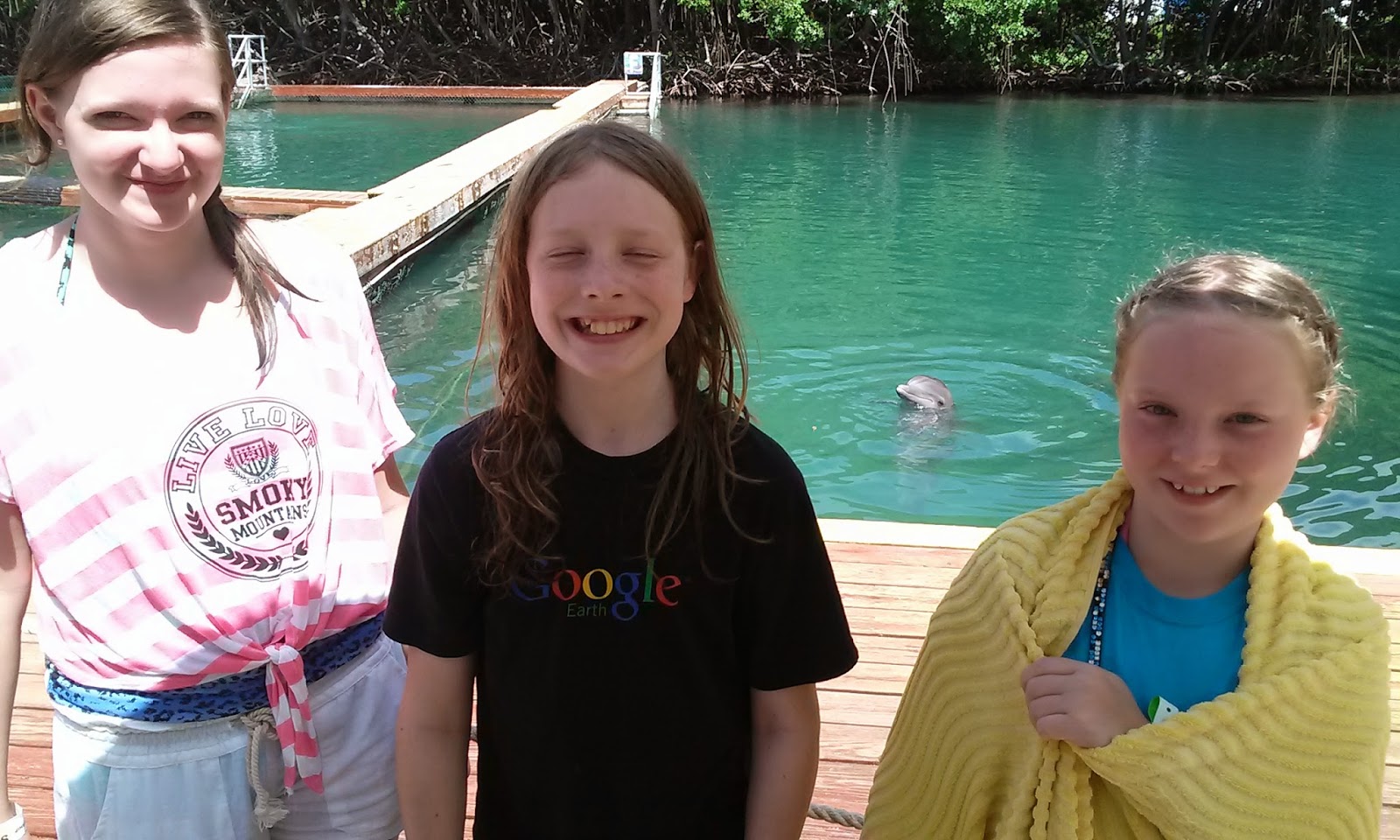 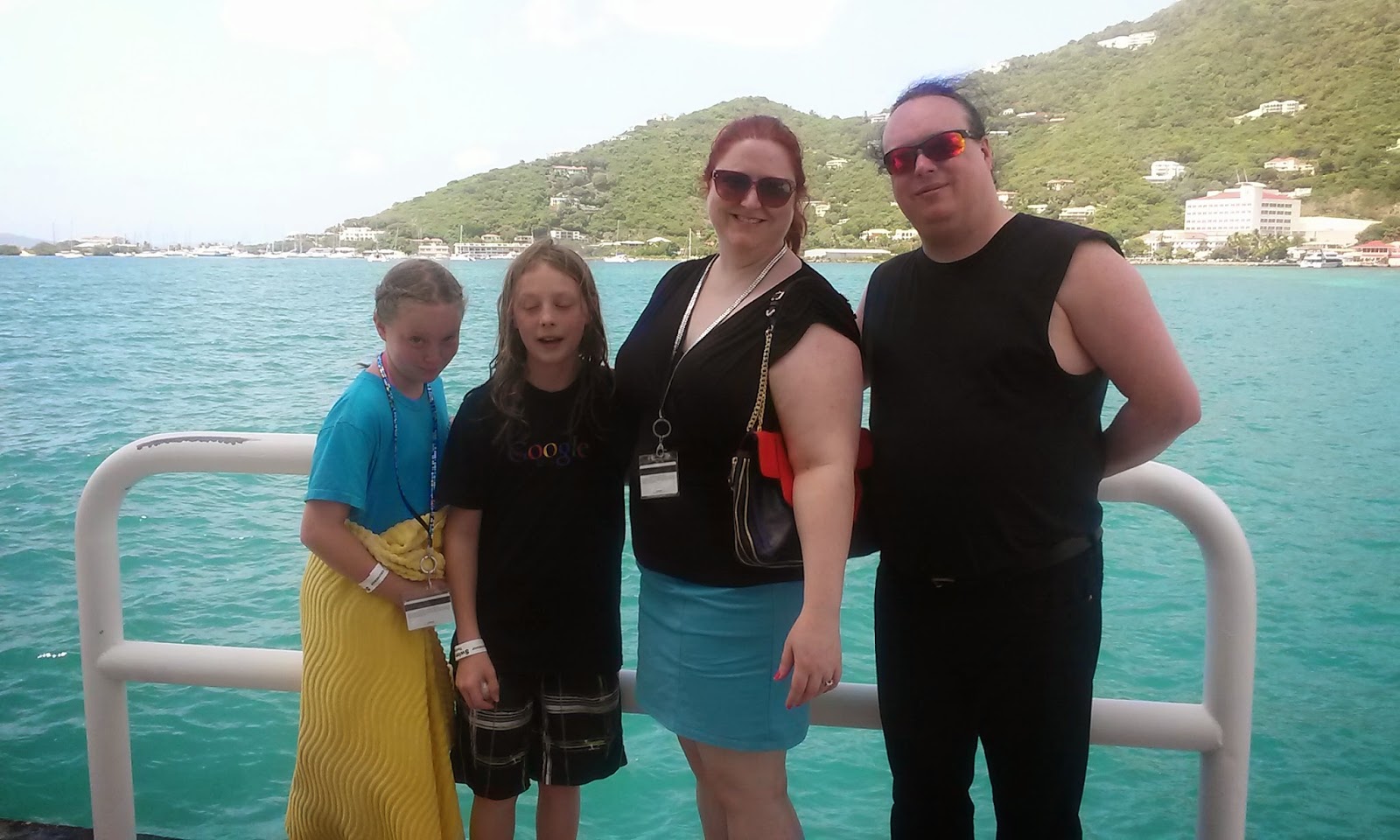 Cas was gracious enough to take a photo o the four of us together. I'm wearing a hummingbird skirt here that I have yet to blog about. I'm a bad blogger, sorry.

The next day was St. Maarten, we docked on the Dutch side. At the last minute we decided to book an excursion out on a catamaran to do some snorkeling and swimming. We were warned the French beaches are clothing optional. We were unconcerned and figured that warning was why it wasn't a full booking. Felicity was the only one that even noticed one person. 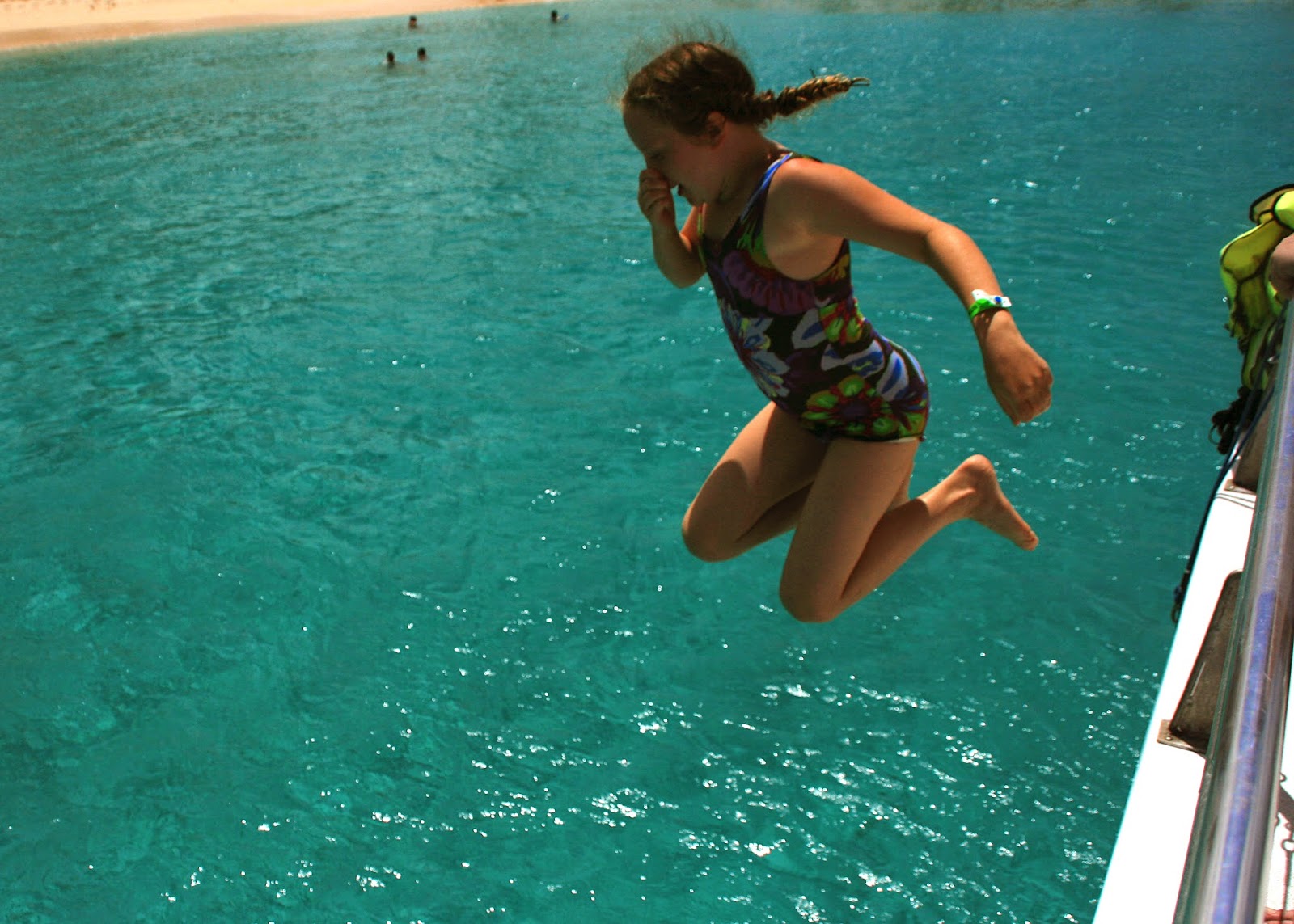 As it was both of them were much too busy swimming from shore to boat so they could jump in as often as possible. We anchored in 16 foot deep water and it was almost like glass, you could see the bottom so clearly. Hawaii wasn't even this clear. 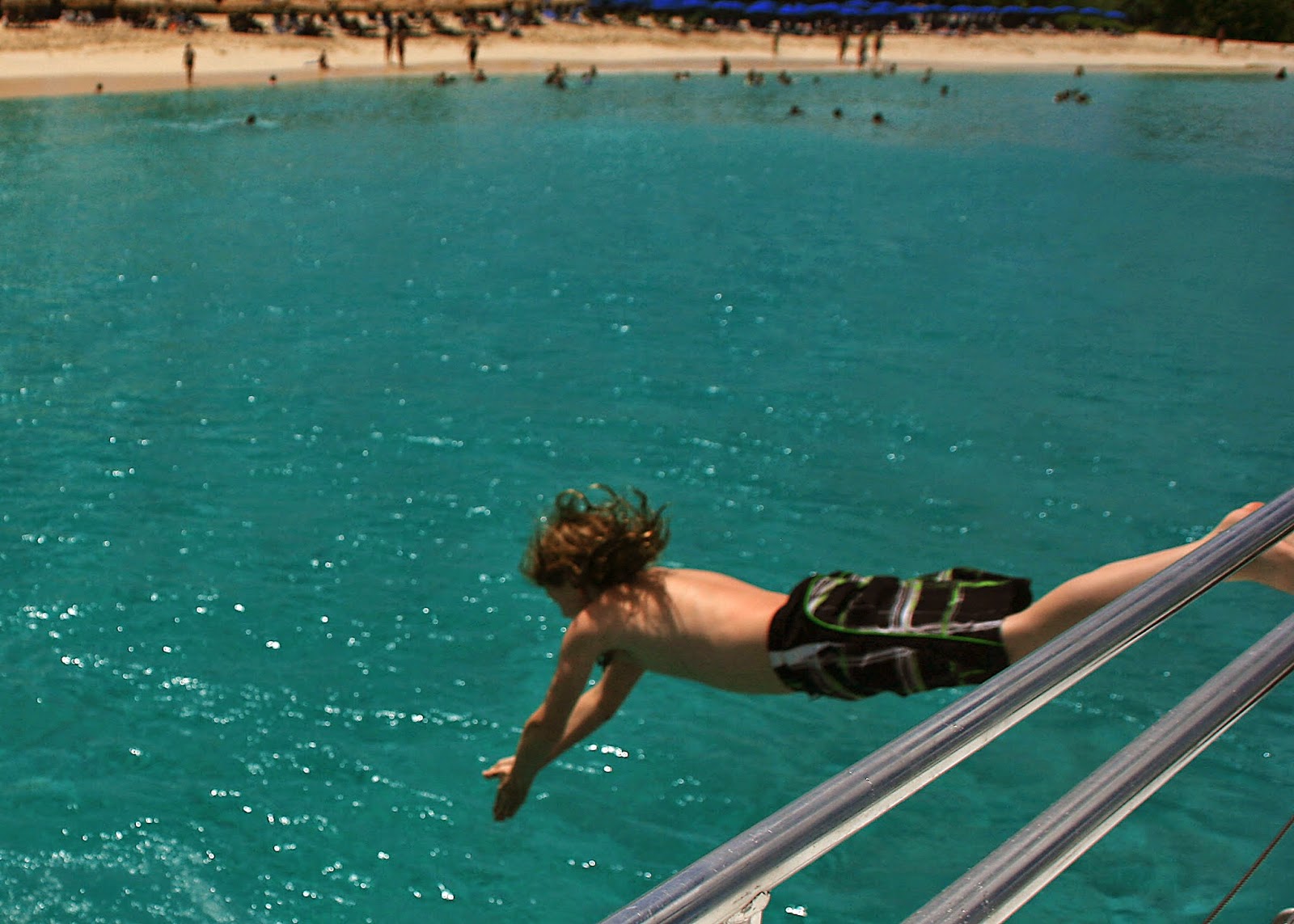 Seriously, have you ever seen water so clear? 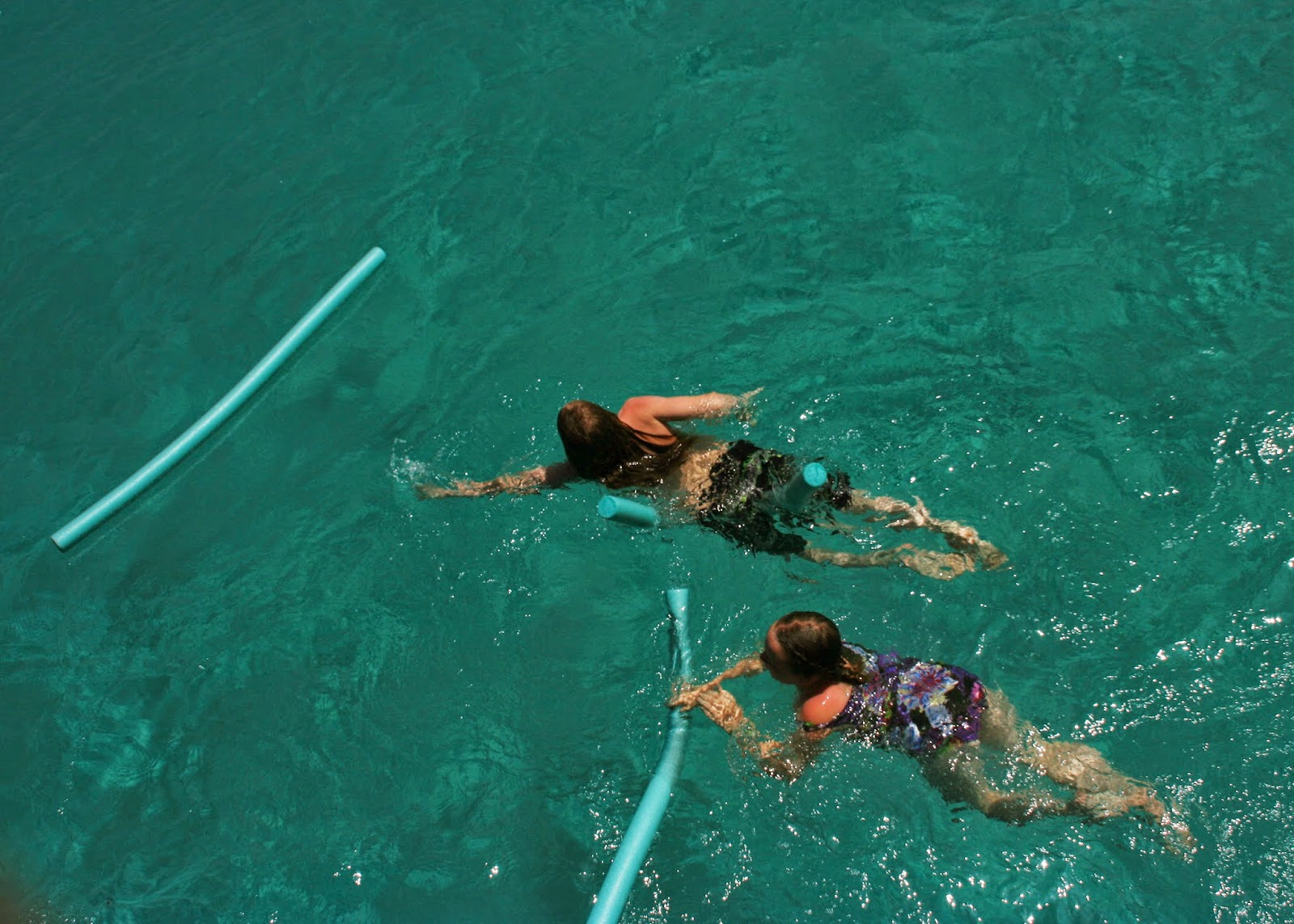 After the first snorkeling trip I decided to stay on the boat. The snorkel was tons of fun but as I was swimming back to the boat my legs gave out on my and I felt myself starting to panic. Since I'm more aware of most of what impending panic attacks feel like I started calling for Daecon. He was keeping up with the kids and reminded me I could inflate the flotation device, I did, but kept saying in as normal a voice as possible that I need help to get to the ladder. One of the crewmen swam to me and grabbed me by the arm and somehow LIFTED me onto the ladder saying in a Jamaican accent "Its OK baby girl". Daecon had my towel and a xanax in hand, told me the kids were OK and didn't complain that i had to SEE them before I calmed down. 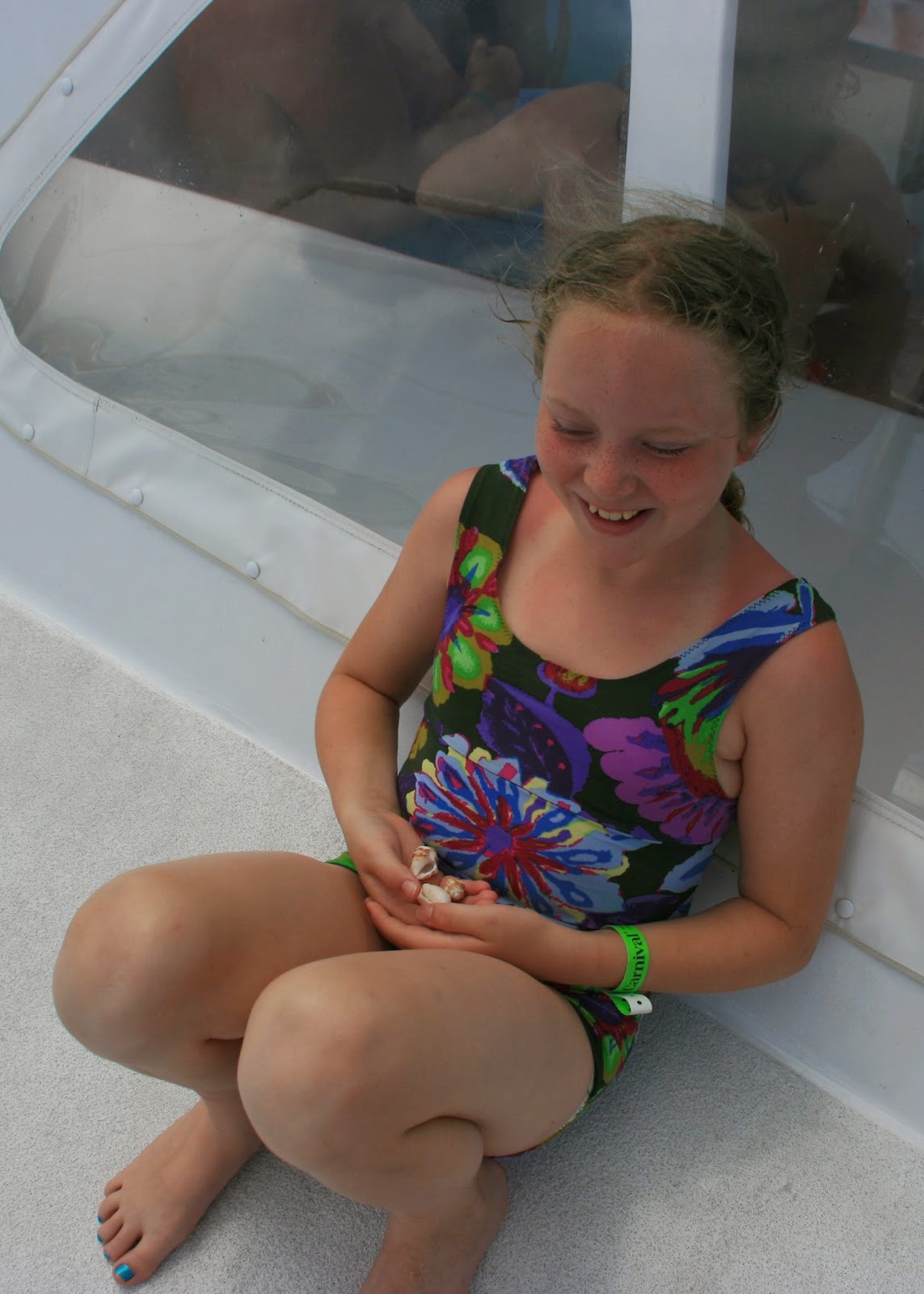 The same lovely crew member gave Felicity some shells he found. Nice ones too! 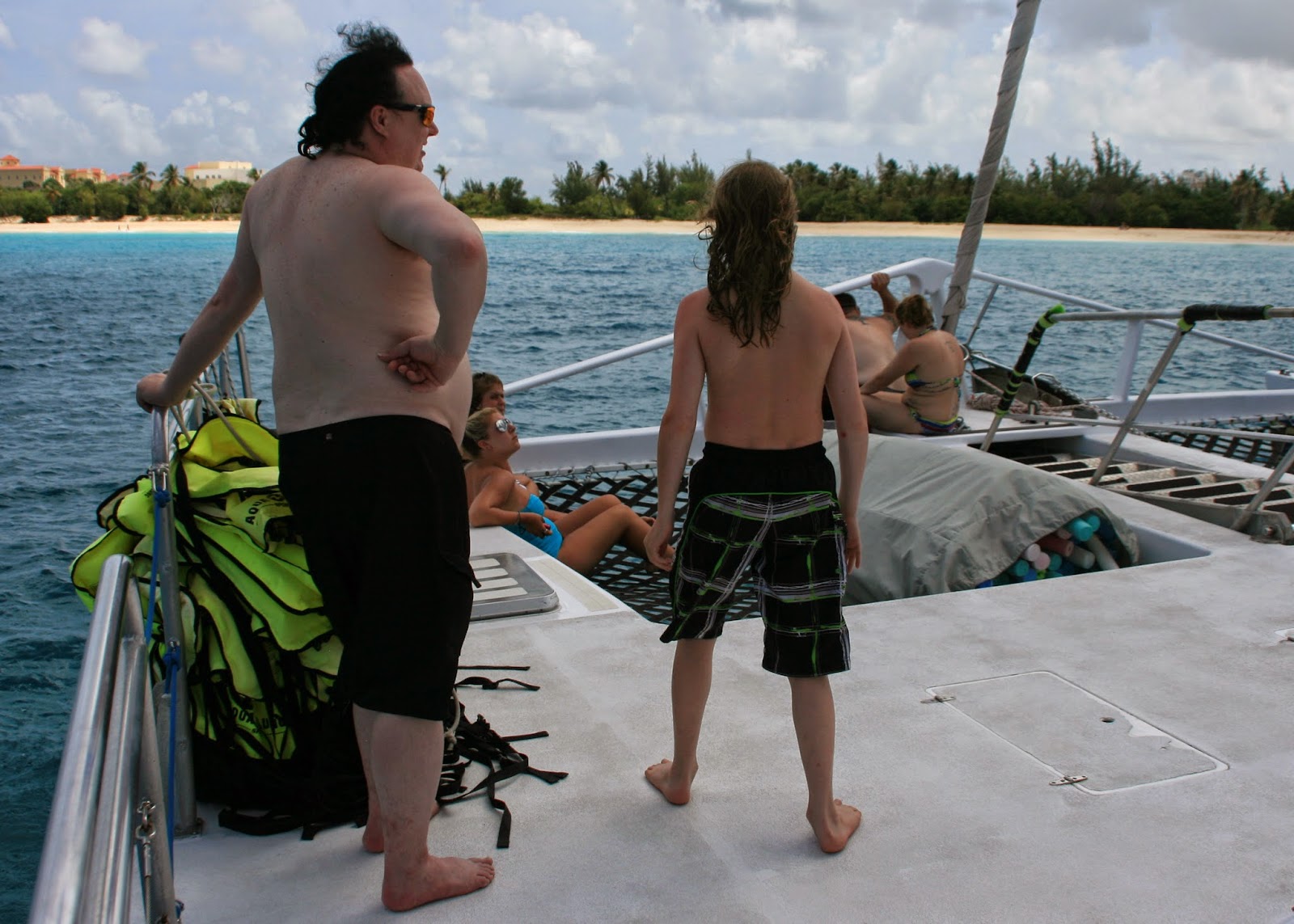 Daecon and Simon enjoying some wind. 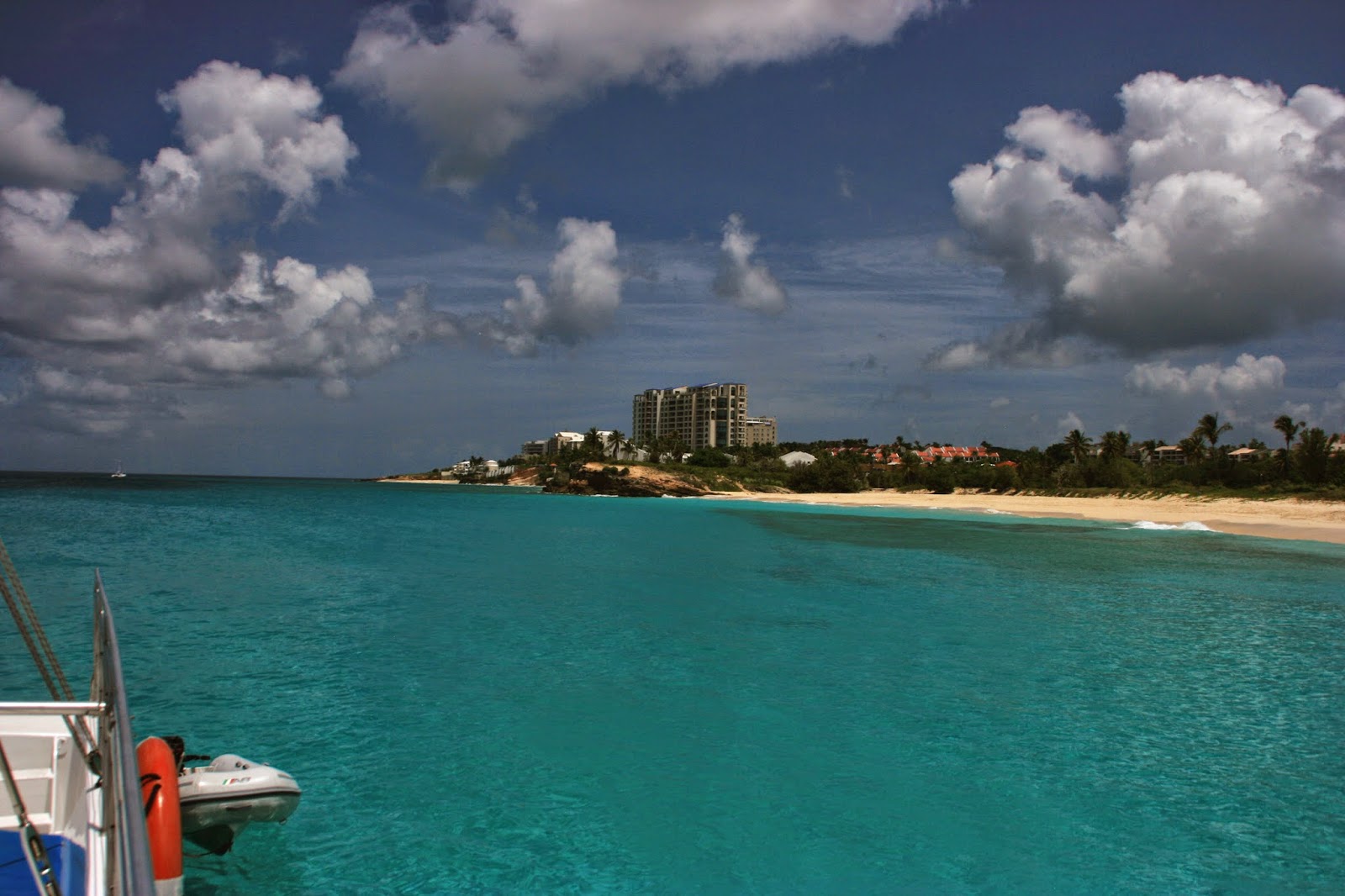 This was the view from the swimming cove. The amount of sun made it challenging to get not over exposed photos. Problem was that the moment it was cloudy I had to change the settings again. I can't lighten some of my others without out graininess. Its OK though, I did come up with a few good snapshots.

And hopefully soon I'll be posting more. I just haven't wanted to take the time to write lately and didn't want to post anything out of obligation. It never really seems fun. I hope you have something planned for the summer, Northern Hemisphere readers!