I Successfully Made Granny Panties (and other reasons I'm not perfect)


Inspired by Gertie's "Defense Of..." post I decided to splurge on the Nutmeg pattern and make my own dainties. Instead of cutting it out of fine silk FIRST I did the sane thing and made it some out of the 8 yards of white cotton batiste I recently bought (ya know, 'to have on hand'). This turned out to be a GOOD thing as it seems that even with knickers I'm going to have crotch fitting problems. Good to know, considering I'm working on fitting a pair of shorts from a 1950's pattern. I thought I was going to have them done in time for going to the Renaissance Festival this weekend, but that was a pipe dream. Both on getting the shorts done and actually going to festival. 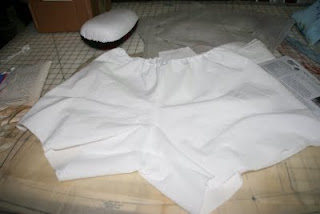 I can probably make some adjustments for a slightly more form fitting fit and less 'smile' in the crotch area (that's where you get those wrinkles that look like smiles... you know?). But I do not think THIS PARTICULAR pair can be rescued in any way to make them not look like glorified white boxers. At most they'll look like boxers with too much lace. Maybe I'll tie-dye them and turn them into hideous lounging shorts for my husband. "Look honey, JUST FOR YOU!!" (No, I don't think he'll buy that either)
Which leads me to UFO box. For the uninitiated this means, in sewing land, 'unfinished objects'. I do not keep a box of small alien ships in my sewing room. Though if I did I could probably make MILLIONS MUAHAHAHAHAAA !! *ahem* So yes, on to The Box. 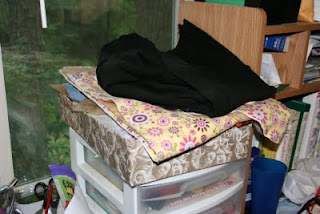 (For a split second I thought that black thing on top was my cat. She has a habit of looking like a pile of cloth. This makes for scratches in odd places when you reach for/sit on whatever she's on)
This box includes, but its not limited to;
And NOT in the box is the muslin for my Lady Grey sew-a-long that became more than overwhelming. Then there are the "planned projects". One day I might even post some of my early attempts at making clothes before I knew ANYTHING about fitting, pattern modification or what have you.

But in more recent attempts I'm not entirely happy with, I tried making my TNT cowl neck out of some leftover cotton lawn from my Chantilly. I'm... meh about it. And my lace blouse? The neckline just isn't all that. I could not figure out how I wanted to finish it and I tried sewing on ribbon but its just doesn't feel right. I did wear it out with my black pencil skirt and my husband said it was lovely and no one but me was going to notice. 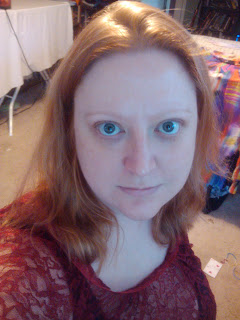 (wonky neckline...)
But that's not the point, right? Photo evidence of MEH, complete with no makeup and unglamorous backgrounds. 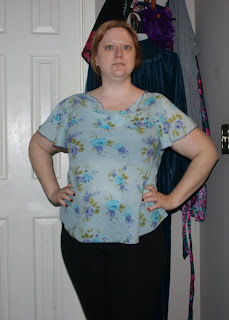 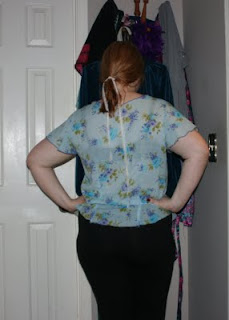 (yes, I used lace to tie my hair back)

The hem is not finished and the purple surging around the neck and sleeves is intentional. Upon seeing it in photos I might like it a smidgen more. Its suppose to go with a cami and the shorts (which will be made from a purple linen blend).

I might give up and just make something for my daughter. Her birthday is rapidly speeding this way.

And I still have my Ready-to-Wear tailoring thingie to do, of which I want the end product just not the journey to get there.
Posted by ladykatza at 3:55 PM