I've been to London to visit the Queen!
Ok, not really. But I have been quite busy getting the house and yard in order. To make Tanit-Isis feel better, I see her backyard jungle and raise her mine: 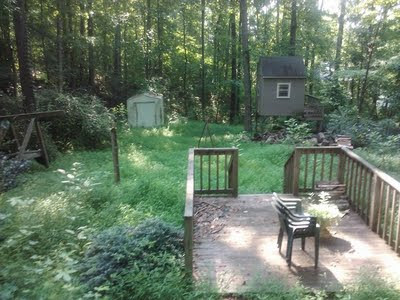 Frightened yet? That's only a tiny portion, too. But here in Georgia we believe in slash and burn. 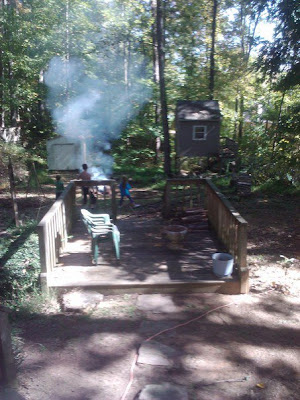 (Wonder if that works in the kids' room too?)

In all fairness, those are last year's photos, but really we do this every June. Usually we have my brother-in-law show up and do all the heavy lifting for a steak dinner and plenty of Jack (Daniel's that is). This year's he's off in Denver working for actual money. I don't know what he's thinking! Wait, I know. He's probably thinking being able to afford clothes is nice.

So what does this have to do with sewing? Well, the mad cleaning frenzy in time for a backyard BBQ has consumed me the last two weeks. That and I seem to be in the middle of a sewing block. I'm surrounded by a UFO invasion and its just kinda been humdrum for ideas. Honestly, I want to make lots of pretty summery frocks just for MUAH. Selfishly. Like Miss Selfish wherever her selfishness may be. Hey, I have an idea. We should all start talking about her and linking to her. Maybe like Beatlejuice she'll appear. Or not.

The other thing on my mind is getting ready to head up to NYC for a much deserved mini-vacation AWAY from it all. I really think that is what I need. Just getting away to clear my head.

Oh yeah, we also adopted a kitty. A lady was giving away kittens outside of WalMart because someone had dumped them and the momma off on her neighborhood and the mother got run over. They can't be more than six weeks old. So I took one home stuffed in my purse. I came in and sat my purse down on the couch just talking to the kids and waiting for the moment the kitten popped its head out. SURPRISE! The wide-eyed-hand-over-mouth AWWWW from both of them was priceless. And so is this: 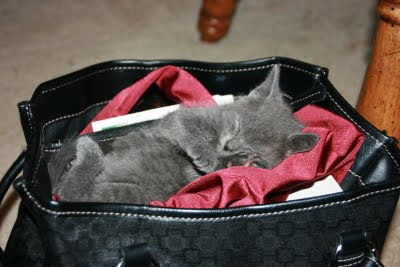 (Amanda stuffed her in her purse and probably would have cat-napped her except the kids would have never forgiven her for it.)
Posted by ladykatza at 9:48 AM