Fashionista and Intelligence: Not Mutually Exclusive

One of the things that has often bothered me is the stereotype that people who are into such professions as science and math, or really anything collegiate in nature, are not into fashion. I say this is hogwash! Just because one is brainy and likes to crunch numbers, write scientific papers, or setup unix databases does not mean they have no sense of what looks good on them. Granted there are the famous stereo types such as Einstein. He had a suit for every day of the week, all put together so he didn't have to spend time thinking about day to day things. But on the other hand, he cared enough to put the effort into THAT much of a wardrobe. And honestly, his hair has become iconic.

I recently had a conversation with another lady at work who I always think "Wow, she looks really put together". Lovely dark skin and hair, awesome clothes (even though not my type, they look good on her, which is the point), and smart. I found out she used to model, then went to college on that money to get a degree in electronics. 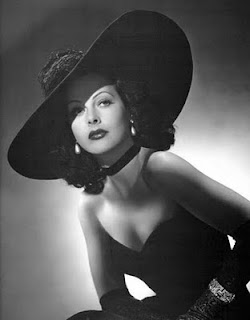 Which made me think about a famous actress from the 40's. As some of you might have guessed, I'm enamored of the clothing from that era. I went searching for famous actresses and came across Hedy Lamarr. Not only is she credited with being the first actress to appear naked in a movie that was not a "Blue Movie" (what they called porn back in the day), but she co-invented a device that eventually led to our current wireless technology. The Frequency-hopping spread-spectrum invention. It was originally thought to make torpedoes and other submarine communications harder to decode during the war, but wasn't put into use until the late 50's(or 60's, I'm being lazy on that fact check). How could a Hollywood actress do such a thing? Turns out she was a talented mathematician before she became and actress and the idea came up when trying to solve a special effects need for a movie.

And to continue the idea of fashion and electronics intersecting, former Project Runway contestant Diana Eng is working on her own line of clothing that incorporates advancements in technology. Things such as El-wire and sew-able electronics called the 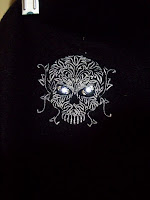 Lilypad Arduino. A fashion subset of the open source electronics for hobbyists created by Leah Buechley at MIT. I happen to own a spool of conductive embroidery thread and have a few project ideas of my own. In fact, I already did one simple one for my son last Christmas.

So it seems to me that one does not need to give up brains for beauty and fashion. They can, in fact, go hand in hand. And I think that if we take this a step further we can teach our daughters that while you don't HAVE to be one or the other, its OK to be both.

So keep sewing, keep learning, and most importantly, stay beautifully true to yourself.
Posted by ladykatza at 3:23 PM