Our Inner Louis Lane: Comics and Sewing Linked in the Past 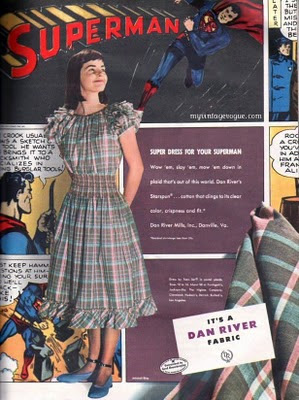 (Image Courtesy of My Vintage Vogue)
When I stumbled upon this picture the geek in me became rather excitable. There is nothing exceptional about the dress and if you read the advert you'll see its really trying to sell the fabric. This being from 1948, selling fabric through catalogs was still widely common.
What really made me like this is because it is featuring Superman and making a reference to the girl imagining herself as Louis Lane. It was rather fresh on my mind since I had recently learned my paternal grandmother would buy comics for "her kids" but not hand them over until after she got to read them. See, Superman debuted in the American popular culture in 1938 and became an iconic symbol for "True American Values". He was the handsome man to the rescue and the world's biggest boyscout (Of course, later in "Kingdom Come" Superman himself said that the world no longer needed a boyscout, but that's a different discussion).
See, in 1947 Christian Dior and the couture houses of Paris revealed "The New Look". It was a very successful attempt to bring back the glamour of couture houses and to try and erase the utilitarian styles left on us by The Great Depression and WWII. We want to remember the grand dresses and shiny stars that grace the silver screen. But in reality the majority of the population was still making their own clothes and still struggling to make things work. To me, this would have been an apealling advertisment to those like my Grandmother that were dreaming of being rescued by their handsome superhero and taken off into a better day. 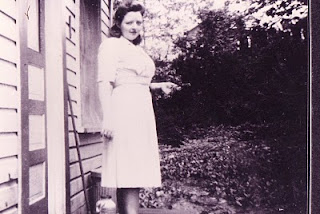 My Grandmother
Posted by ladykatza at 11:38 AM