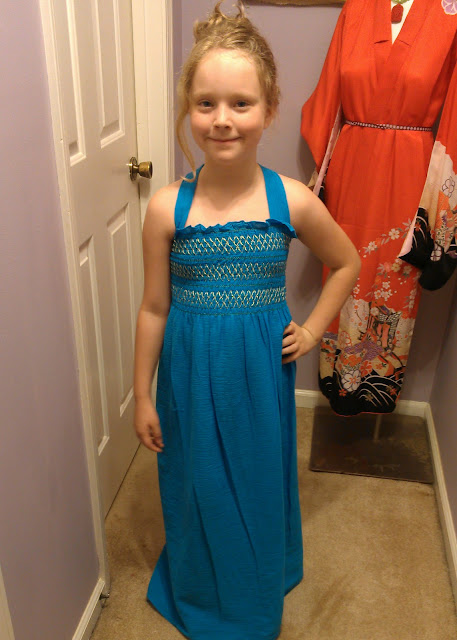 I didn't get any of Felicity's retro outfit done, but she was much more excited about this dress anyway.  We bought it during last Saturday's excursion down town that involved me getting more batiste and silk organza for underlining and the kids picking out fabric for their elf costumes. Which was news to me cause NO ONE had said anything about their costumes previously.  WTF?  Anyway, I call this "cheater fabric" because its already shirred.  Its also 55" long so I had to cut and hem it for Felicity.  And its a seriously pretty dress on her too and makes her look too grown up.  It was fairly inexpensive, so, you know. Its cool.

Simon and my husband, on the other hand, spent 30 minutes looking for the the exact right green for Simon's Legolas  costume. They came back from the silk section and both had this very self-satisfied triumphant grin on their face.  They then procured the bolt of emerald green silk dupioni for a whopping $25 a yard.

"REALLY???" I asked my husband.
"Yes, it was the only thing that fits, and it shimmers and looks like trees."  Which it did, he was right.  I was incredulous.
"Twenty five dollars a yard for a costume? A KID'S COSTUME?"  They both just grinned big ass grins and nodded at me.  Husband went on to explain that silk would have been worn by archers anyway because it wraps around the arrow if they get hit and helps make it easier to get the arrow out.  At that point I gave up and was like "OK FINE!".

My husband is an enabler.  He's not allowed to complain about my fabric habit anymore. SHEESH.

In any case, we're about to pack the car and head out of town.  If you want you can follow me at Instagram.  Username is  "ladykatza", like it always is.

Stay cool everyone. CHEERS!
Posted by ladykatza at 5:28 AM

Email ThisBlogThis!Share to TwitterShare to FacebookShare to Pinterest
Labels: costumes, its so hot, on vacation, sh*t my family says