You know my friends are a bunch of enablers, right?  That would be half the reason for the above photo*.  The other half being I'm not hard to enable when it comes to costuming.  It started out with me wanting to go see my niece at Dragon*Con even though I had decided to pass it up this year.  For those of you that may not know it is the LARGEST multi-genre sci-fi fantasy convention in the country and the largest convention in the Southeast, period. 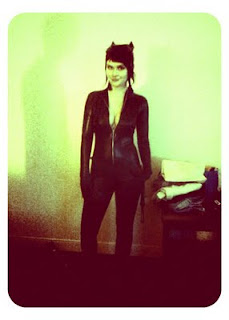 Last year was my niece's first and this year she came back again.  That's her up above as cat woman.  Below is Iron Man.  I literally went SQUEEEE.  Seriously,  these costumes played music and clanked as they walked.  THEY WERE SEVEN FEET TALL. No matter how many years I go there's always that one that just makes my jaw drop.  Last year was the 8 foot tall Bumble Bee costume. 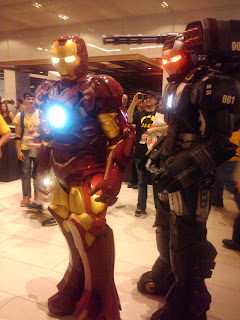 So what started out as just going to hang out for dinner ended up with a friend giving me two badges and an invitation to a private party.   There's perks to knowing most of the geeks in this city, really.  And I couldn't walk 10 feet without seeing someone I knew and I got so many hugs.  SO MANY.  It was cathartic.  And I broke down into tears in the art gallery because Mom was an artist and it just kinda hit me like that. 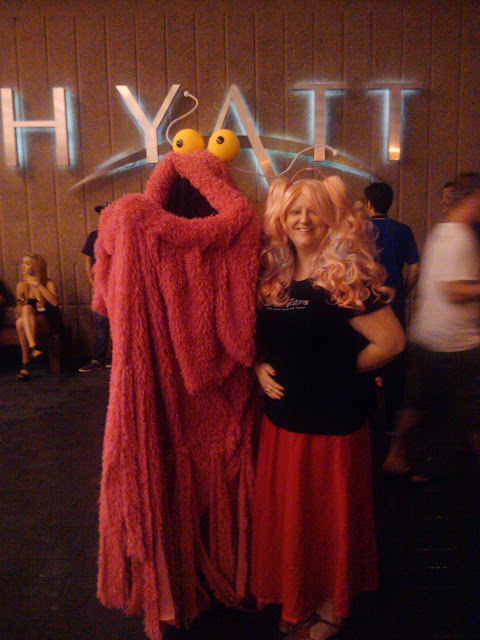 But then an alien came to cheer me up.   GREETINGS.  But in all serious, thank you for everyone's kind words.

*Expect to see that pink wig again.  And also, all these pictures were from my camera phone because I really didn't want to keep up with my camera.  And for anyone curious, my shirt says "I beat the Kama Sutra. The end guy was hard".
Posted by ladykatza at 6:11 PM