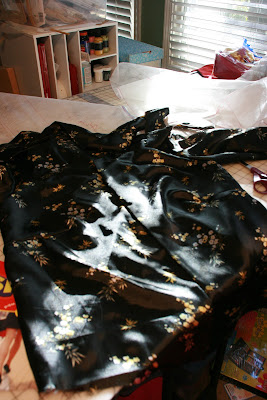 Wader-rita-ville is like Margarittaville* except there's more vodka and less tropical beaches.  And a lot of wadders sitting in the corner as everything I seem to be attempting to undertake for me lately has turned into a frustrating waste of fabric.  So, Lesson number I've-lost-count-at-this-point:  I have curves and no matter how hard I try to make it fit, garments like this one will look like over-sized sacks made out of pretty fabric. I seriously didn't even want to take pictures with it on, it was just that sad.  Non-poly fabric won't help any.  I need more 'shaping' in my garments, and that's that.   Here's some photos of some of the mods I made:

As you can see, there is a significant y-bust alteration that added a dart.  I also added a quarter inches to all the seems.  I FORGOT to cut it out with seam allowance so it was tight through the shoulders. something I could fix.  What I could NOT fix is the fact is that its suppose to be a slip-on blouse. I might have been able to "tuck it in" and make it wearable. But to make it not pool up over my backside would have required widening at the hips an amount that was just absurd. And then take a sway back adjustment.  In other words.. too much damn work for a style I shouldn't be wearing anyway.  So back to plan A.  Wait for another Vogue Pattern sale and get this one:

OH HEY THEY ARE ON SALE!  I tried to get this one at JoAnn's during the last 3.99 sale but they were out in my size.  This is what happens when you don't descend upon them as they  open of the first day of the sale.  POOOP.

So after this rather disappointing failure, despite the fact I managed to churn out a halfway decent looking project, I sewed up  a bat-wing blouse from this free burdastyle member pattern out of some gauze knit i got at fashionfabrics.com for some absurdly stupid cheap price.  As a side note, don't stick rayon gauze knit in the dryer.  It shrinks, but only on one side and its... weird.  Lets just say to get "on grain" i had to cut it at a 45 degree angle and I had given up hope before I started.  Wouldn't you know I kinda love it and now I want a bunch of them to lounge around in with my yoga pants.

Sooo.... yeah. I'm feeling kinda discouraged on the "things I can actually wear out of the house" front. I'm sure I'll pick up again and move on. So in the meantime, I give you the most awesome heaping pile of bizarre I've seen in a while.

*As a funny side story, I am allergic to Tequila. It sort of took a while for two and two to connect as I thought it was just the mix of alcohols in a Long Island that made our designated driver stop the car so me and my best friend could hurl over the side of the I-75 overpass.  (Another side note, the propensity of goths to wear corsets to dance in makes vomiting physically problematic.)  AHHHH... the days of misspent youth.    In any case, it wasn't until later when I started breaking out into a rash every time it was time to do shots well... that ended that.  Then Dad happens to mention he has the same problem, and oh yeah, don't eat any guava products.
Posted by ladykatza at 3:45 AM