Wow, where to start? Well, first of all I had a very rough week at work. My daytime coworker moved to another department so I'm doing a double load of work. I've done this job long enough that I can do it but it stresses me out like mad. People are being interviewed so I'll have a trainee soon. Again, I mostly like my job and as rough as the 12 hour days are I like that four days off every other week (work 3, off four, work four, off three), though I'm still wearing the house wife hat on my days off. I know I don't normally talk about that stuff, here, but its a major reason for my lack of posting. I'm attempting to get into a frame of mind where I schedule my days off to be more efficient so I can have time to spend with family and friends. I'm thinking that Thursdays will be my "I'm sleeping in" days (think 10am). Though getting up at 8am is sleeping in when you get up at 4am on a work day.

But hey, you probably want to know what I've been working on. Well of course I've been talking about Vogue 8747.  I finally finished it and I'm wearing it now as I type this (at work... shhhhh, don't tell). I didn't get photos of me in it because hamming it up in front of a camera wan't on my list of things to do. I did take a photo of the finished product.
I should probably pick my socks up off the floor. And vacuum. Meh.

The back of this blouse fits me better than the dress form. See previous rants about my shoulders.

So, I love this blouse enough I already have a second one cut out. And I'm using these pretty buttons from the stash I inherited from my mother. I love that I have things like this as a constant reminder of her.

Even though I cut out the fabric I didn't feel like something so intense, so I threw together a few items for Felicity. First up was a raglan T-shirt. I made the pattern from a defunct RTW shirt, and she loves these things even though they are like totally easy. 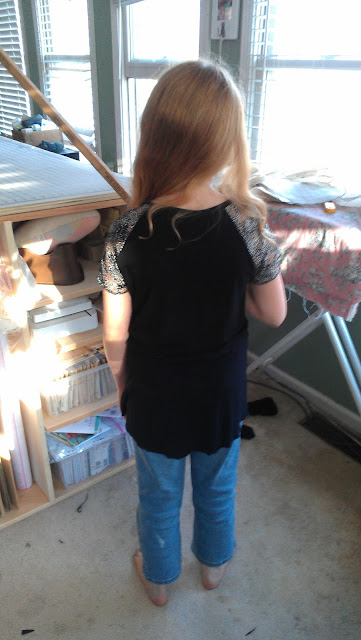 Next up was the PJ pants I cut out a couple weeks ago. They are PJ pants so I' not sure how much else I can say about that. She was happy about them, too. And the kitties are wearing bowties, cause bowties are cool now.


She was wearing this when her Grandma came to pick her up, apparently they had something to do at church in the morning.
Posted by ladykatza at 10:31 AM