Challis - A History of Our Chalet's Namesake

Hello Chalet guests, have a seat and lets talk a little bit about the history of our namesake, challis.

According to the dictionary is a lightweight plain-weave fabric of wool, cotton, etc., usually with a printed design. Which is all well and good, but doesn't really give us more information than that. So I figured I'd start with what a "lightweight plain weave" means.  Enter a text book from 1925*.

"A plain weave" is where one weft yard passes evenly over one warp yard. This takes the least amount of material to make and is very inexpensive. The book goes on to say that challis is made from cotton and wool (rayon has not yet caught on). 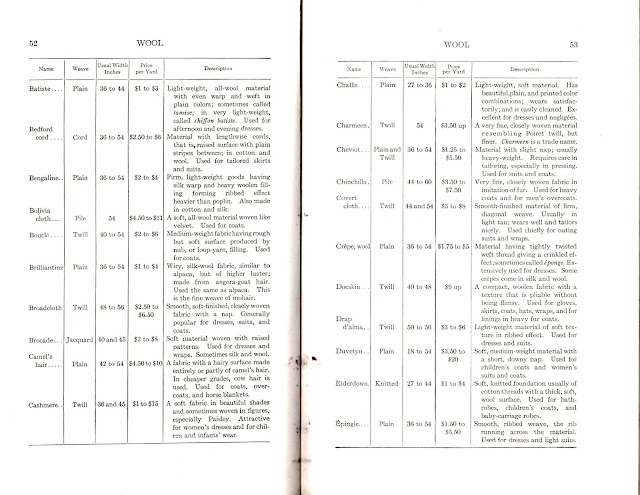 Wool challis is light and soft and recommended for dresses and negligees. It will cost you (adjusted for inflation) anywhere from $13-25 dollars per yard (no wider than 39"). 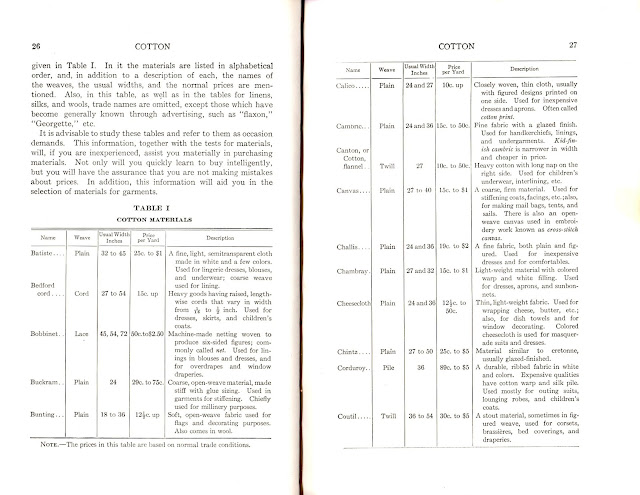 Cotton challis, however, is considered for inexpensive dresses and "comfortables" (lounge wear, I'm assuming).  This will run you anywhere from $2.50 to $24 a yard (also, no wider than 39").

Now lets fast forward about 15 years, just before WWII was really under way. Chemists had been working on improving rayon, or "viscose" as it were to make it easier and more cost effective to manufacture. Somewhere around the 20's it started being called "artificial silk" and, as I looked, was not yet more than a foot note in text books but popular among households, until the 30's and the Great Depression.  But here's info according to DuPont's timeline.

About the time of the 1940's, DuPont started pushing rayon through what I can only assume are the original "infomercials".  I found an example from 1940 itself.


But rayon, and coincidentally, rayon challis, didn't catch on until the USA was fully embroiled in  WWII and rationing started.

After this country entered World War II practically no staple clothing fabrics of prewar quality were manufactured for the civilian. Some of the materials that homemakers used during peacetime in enormous quantities to clothe their families virtually disappeared from the civilian
consumer's market. No 80-square percale, no fine-count two-ply broadcloth or voile, and little gingham, chambray, muslin, nainsook, lawn, or poplin was available. These shortages were due in part to Government regulations which directed enormous quantities of textile goods to the armed forces. In order to stretch as far as possible the small amounts of fiber available, there was also a lowering of quality of textile materials made for home folks.
By the spring of 1944 the supply and variety of serviceable cotton fabrics were limited. The prewar backlog of materials of good quality was used up and the flow of these fabrics from the factories to the stores had almost ceased. In the small cities and towns, particularly those near military bases or camps, the shortage of staple materials was acute. Many of the few fabrics available, particularly the cottons, were so unattractive in design and color that they obviously would not have sold readily, if at all, in normal times. Rayons were generally more plentiful and more comparable to prewar fabrics than were the cottons, but some types of rayons were scarce. Wool and wool mixed fabrics were more plentiful than the cottons. Mixtures of wool and rayon were common, but few wool and cotton mixtures were on the market.
From early in 1944 until several months after the end of hostilities, homemakers in various parts of the United States found many of the available staple clothing fabrics so coarse and sleazy that they scarcely justified the money spent for 'hem or the time and energy used to make th jloth into garments. Many of the fabrics shrank and were faded by light and washing.

The relatively large volume of "too poor" fabrics might have been replaced by a smaller volume of materials of better quality if minimum quality standards had been set up for textile goods. Such standards under Government control would have prevented textile raw materials from being manufactured into inferior fabrics in this period of scarcity.
Before World War II considerable progress had been made in determining the physical characteristics of cotton woven goods such as broadcloth, chambray, gingham, and percale (5, 6,16,17).2
Federal specifications developed for the use of Government agencies in purchasing these goods have been in existence for several years (11, 12,13, 14). In these specifications for broadcloth and chambray differences in quality have been
designated. On the other hand, the quality of other classes of cotton and of various types of wool and rayon fabrics is not so generally known. The quality of various kinds of mixed fabrics composed of cotton, rayon, wool, and other fibers needs to be studied since they are becoming more and more common. Some of these fabrics are included in this study. Found here in Google Books, Quality of Fabrics Study in 1946

So, in essence, rayon and particularly challis, became popular because what else was there to use? Here are some vintage samples.


Well, that concludes today's lesson. I hope you enjoyed it and learned something new!
Posted by ladykatza at 12:50 PM