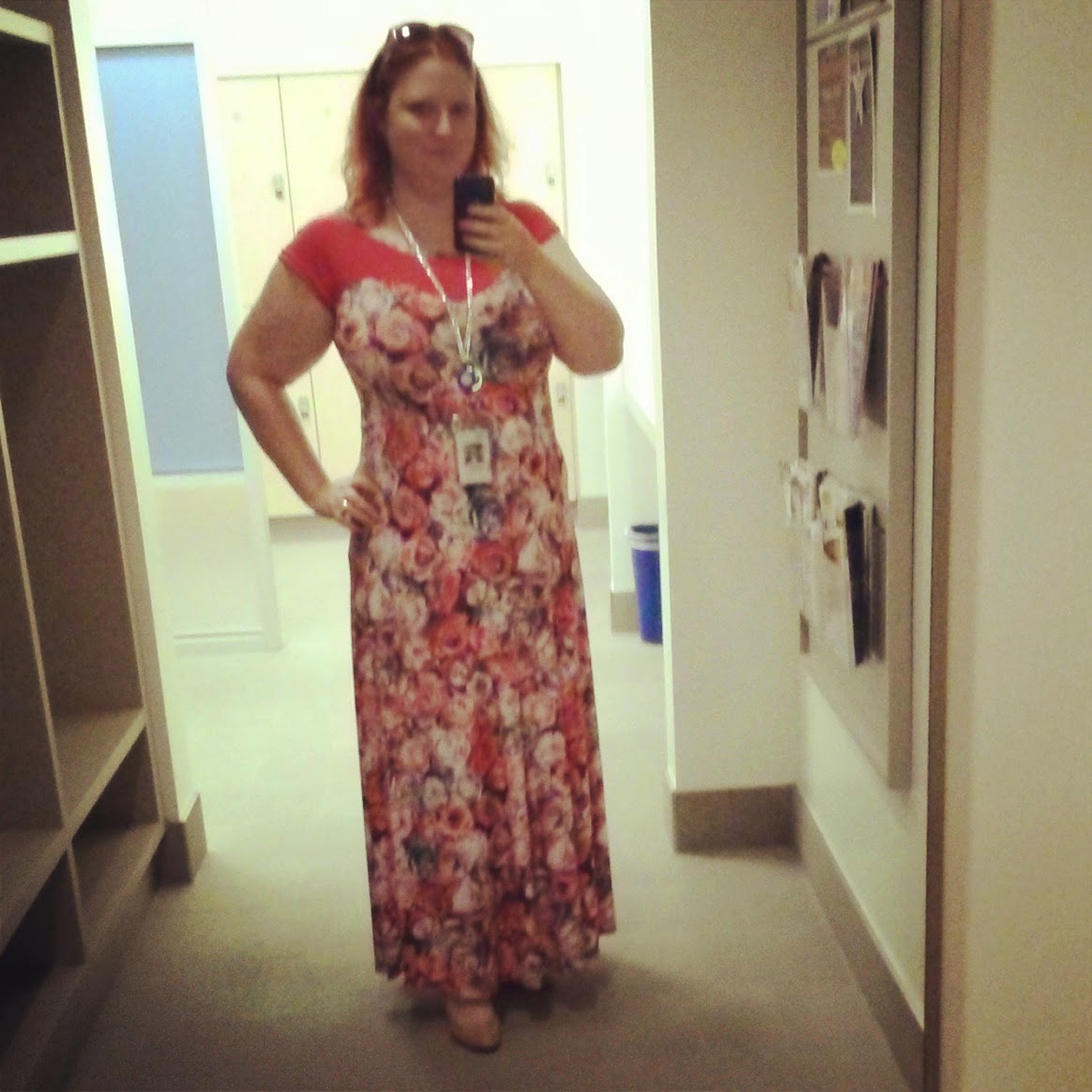 I'm sitting at work in a recently make Kitschy Coo Camino cap maxi dress (real photos later) in many shades of bright pink, digital print roses and wondering how I got here.  And by 'here' I don't mean work, I mean wearing pink.

Since venturing into sewing for myself things other than costumes, I have also ventured into unfamiliar waters of wearing bright colors (ya know, OTHER than red) and shapes that I haven't previously been able to explore and I'm having a great deal of fun doing so. BUT, and this is where the title becomes relevant, I always have this small voice in the back of my head saying that I'm betraying my inner geek girl.

It might be the same small voice that is in the back of many other minds, or the debate of what entails a REAL geek girl would not be a thing. Though I don't mean fandom specifically, I'm approaching this from a general experience of what it was like to be a nerd or geek or whatever-the-frak its called now, in high school. We weren't the cool kids with the in crowd keeping up with the latest fashions. At least I wasn't until I jumped head first into grunge, largely thanks to Nirvana, before everyone else caught on. Mom had, for a long time, tried to make me things that I saw in the magazines but the early 90's were total crap for people that sewed. When we moved to Georgia she basically stopped trying at all because I was making my own money and spending it on clothes for myself. It was a lot of the boho chick that I still love today but then I detoured and dove head first into Goth. OMG, I loved me some Goth but maybe because it just extended my ability to wear Ren Fair garb outside of that venue.

So in retrospect, I was certainly into clothing and fashion but it was to the beat of my own drummer. That drummer never won me any popularity points, the biggest relief was moving to Georgia where the school was large and I mostly stayed off the bully radar. I hung out with the band nerds and what some considered "the bad kids" (usually male), but largely because they didn't scare me and they weren't so much as bad as they were acting out on crappy home lives. At some point I became their sounding board and therapist because I never jumped to conclusions and I called them on their bullshit. Two boys in particular told me after we graduated that I had saved their lives just by being there for them. I'm not sure how this tangential thought happened, so I'll digress.

What was I talking about? Oh, right, betraying my inner geek girl.

So, fast forward two decades where I'm now working in the IT industry with a very old, large corporation. Its not been around as long as its parent organization (over a century) and the technology portion of it has relaxed the dress code to Business Casual, unless the suits are popping over for a visit. But its the casual portion that I am stressing here. The GenXer's have had a great deal of influence over the years inserting a sort of disdain for the stuffy dress of our elders. The women of this very technical industry were, by and large, the awkward geek girls from high school and thanks to our Riot Grrl 90's we were now beyond fashion. We are better than that! We are all about what is INSIDE and how that counts (i still believe this) so much more than what we wear! Those fashionable girls are the enemy.

It didn't occur to me until much later that that attitude is ultimately the same thing as high school exclusionary tactics from the other side of the isle. And it hadn't occurred to me how much of this attitude and seeped into my unconscious until I caught myself thinking, and even voicing, my own disdain for the girly. Like full skirted dresses with lace, gingham maxi dresses, bright colors, and florals in general should be verbotten. Or something. I would say things on Facebook like "I'm going to lose my Goth Card for this" and even the most stoic of my friends said that was a silly thing to worry about.

I mean really, I'm a grown woman and what others think of me is none of my business. I'll wear whatever I damn well please.

Posted by ladykatza at 6:00 AM

Email ThisBlogThis!Share to TwitterShare to FacebookShare to Pinterest
Labels: being yourself, fashion, feminism, sewcialists, sewing