Check Out This Zipper! 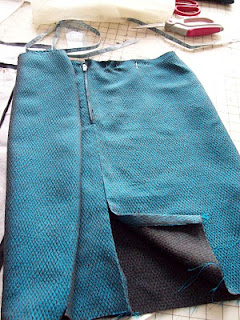 As promised I took some pictures of the Skirt-In-Progress. I have decided that I am going to call it the "Dragon Scale Skirt" because the way that it reflects light gives it an ethereal sheen and makes me think of the Blue Dragons from the Pern Series.

I found this fabric at Gail K's. There was only one bolt of it and it was a whopping $30 a yard. The plus side is that at 60 inches wide I figured I could squeeze the fashion fabric out of just one yard. The down side? After washing and laying it out I discovered that it was very badly off grain on the cut so I had more like 7/8ths of a yard. I knew that it would be four inches shorter than usual, since the bottom will be trimmed with fur. It took some serious fabric origami but I got it cut out. And after my last skirt I learned that one shoul 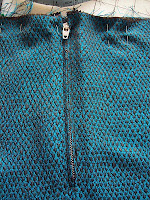 d put the zipper in the back pieces FIRST before sewing the rest of the skirt together. I decided to machine stitch in a metal zipper because I'm rather hard on my clothing and hopefully I will be able to wear this skirt a lot. I'm really proud of how the zipper turned out. 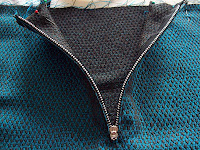 The pins you see in the skirt to the left are marking the darts I need to take. I have... well I have what my husband affectionately calls "ethnic booty" and a sway back that curves into a waist that's almost 10 inches smaller than my hips (and my bust and hips are almost the same circumference, especially now that I've been putting effort into working out and weight loss). This is one of the reasons I learned to sew. RTW doesn't make garments for the true hour glass shape. So four darts in the back of the waist to take in four inches. Hopefully without puckering.

So now I have to finish the darts and sew on the fur trim at the bottom and then start on constructing the lining and the waist band. And since I don't have enough fabric to do ONE solid piece of fabric I am going to use a men's tailoring trick in which you have the seam go through the waistband as well. This will make it three separate pieces sewn together but also allow me to take it in if necessary (or out, but who wants to think about that?).
Posted by ladykatza at 11:58 AM