How to Acquire More Sewing Machines

Well the first thing you need is a family full of pack rats that also happen to sew. My first sewing machine acquired was my Grandma's portable quilting machine that my Aunt Kristi sent me after she passed away. I cut my teeth on it but found myself very frustrated cause I wanted to work with knits and other fidgety fabrics and quilting machines really only like cotton.

The next machine was a Brother SE-270D that Mom got for me as a Christmas present. That doesn't really count toward the pack-rat tendency, but that put me at two sewing machines. Ok, cool. I packed up the portable for emergency backup sewing machine purposes. But this only made me lament for a serger. I really wanted one badly, but they are expensive so I made due. But then my husband's grandmother passed away and my mother-in-law now found herself with THREE sergers. So I inherited one of them. I have been very happily honing my skills with knits thanks to Gertie's guest poster.

And this past weekend my Mother-in-law brought me this (just the machine, Manga* was already there. In fact he's still there. I'm not sure he's moved in two days): 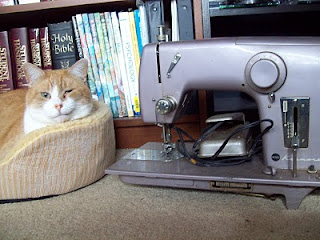 Its an old Sears Kenmore made out of solid metal and I think it might weigh 40 pounds. Thankfully no one had to die for this one to come to me. HAHAHA *ahem* Right, tasteless jokes. Anyway.... All it does is a straight stitch and SUPPOSEDLY its heavy duty enough to sew leather and denim. This is good cause I have some projects coming up that need to do just that. One day... maybe, in my dreams.

So add this to my daughter's sewing machine (One of the last of the Singer Featherweights) and That makes five sewing machines. FIVE AH AH AAAH!


*If you are wondering about Manga's one eye looking all weird its because he survived a coyote attack earlier this year. We thought he had lost the eye all together but it turns out he's still able to use it. It get weepy from time to time and I try to put medicine in it but then he gets mad and won't come home for a day or two.
Posted by ladykatza at 7:00 AM