I'm not dead yet!

But I just might be by Christmas. Well no, not really. The seasons really do effect my mood and after almost a month of the entire household having one illness after another I just wanted to crawl into bed and hide under the covers. Except a couple Friday's ago I managed to go out dancing with some girlfriends and ended up with a new friend. And a commission. Probably the ONLY kind of commission I'll take cause its a SCARF. Seriously, scarves are a strip of fabric, how bloody hard can that be?

How did I agree to doing this? Don't ask, that's classified information. But let's just say that this friend really likes Burberry Scarves, which are "HOLY CRAP $200+ FOR A STRIP OF FABRIC REALLY?????" expensive. I can get you two yards of nice cashmere for half that. But since he wanted it to be the same colors in a plaid this involved going to my favorite fabric store in downtown Atlanta. And since my niece and sister were in town for Thanksgiving I got to drag them along. (My niece looking through the shiny section. All together now, OOO SHINY!)

That's my family for you. They come into town and we go to the fabric store, or the music store (like, the kind that sells SHEET MUSIC, remember that stuff?). Or comics... Geekiness is inherited, of this I'm certain. 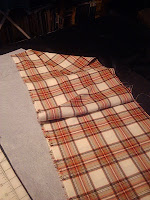 Anyway, I also was there to get some cotton velvet for a cropped jacket, or bolero, whatever you want to call it. But after combing through the massive table full of wool suiting weight material I found what looks to be a perfect match. Its a Pendleton Wool, very VERY soft. I was hoping that I'd have enough left to make a skirt but I'm making it double thickness so no.. no dice. But there it is to the right. They had several bolts of the stuff so I might just go back for more. As it is I can probably make a plaid skirt for Felicity.

OH, you want to know if I've been sewing other things? Why actually I did manage to make a few garments but I can't post any pictures because I don't have a way to take them myself and good lighting + me + husband at home don't happen often at the same time. If anyone wants to donate a decent camera with timer and tripod to the cause it would make me REALLY happy!

The two days before I went dancing I had an overwhelming urge to make a black and white polka-dot knit dress. I finished the dress in time for Friday night thanks to a wonderful bout of insomnia. That would be View C from Vouge8679. The dress was apparently successful since I made a new friend the night I wore it out. I also made a black double knit skirt from View E on Vogue8672. I've decided that this skirt adds +10 to my charisma bonus and must be worn with caution. I'm still gonna make more.

All the kidding aside, though, I have found myself somewhat crippled by the skirt I want to make inspired by Oscar de la Renta. Knowing I have everything needed to make the skirt while at the same time feeling overwhelmed by the undertaking has led to a lot of delaying on other projects or avoidance of sewing altogether. Friday and Saturday this week I took a deep breath and dove in. Cutting out the fashion fabric proved to be a feat of geometric proportion. But I did it and I serged the edges, got the lining pattern drafted and cut out, and also cut out the fur (fake) trim for the bottom. I will say that this is probably the nicest faux fur I've ever worked with. Last thing I did last night is trim the seam allowances and it kind of felt like I was snipping fur off of my cat. So I'll try to take some construction pictures of that and I will feel so much better once I have that silly thing conquered.
Posted by ladykatza at 10:33 AM