HALLOWEEN WAS A MONTH AGO?! 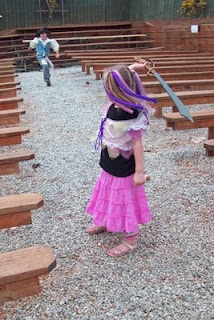 (Princess and Pirate at the Renaissance Festival two years ago. Have I mentioned I love my kids?)

And here I realize that my last post before the Dec. 5th one was about going to take a nap and then finishing my daughter's costume. That was over a month ago! Man, I've been in a serious funk. Aside from the lack of sunshine in the winter, the back to back big family holidays stress me out. Why? Its hard to explain, they just do.

So I had to work the day of Halloween. This was the first time I hadn't managed to get the day off at my job. Since I have had most of the other holidays off I just decided it wasn't worth arguing. I did get pictures of the costume I pulled out of my ass at the last minute for Felicity. For reference, she wanted to be Aang, from "The Last Airbender". The cartoon on Nickelodeon, not the movie. This was a very very important distinction for her. Simon wanted to be a ninja warrior and since I was pressed for time and couldn't imagine improving on it, I just bought one. I felt a little dirty doing so as I have NEVER EVERY actually bought a costume before. That's totally cheating. He wore it for three days straight until I forced him to take it off and put it in the wash for fear it might become sentient on its own and walk away whilst he slept. But I digress. 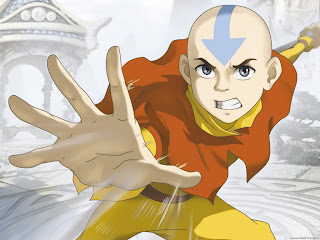 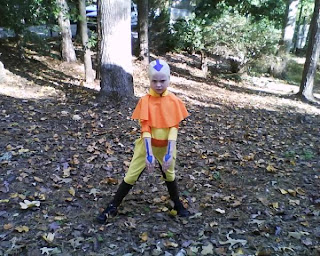 So you see Aang above? He's the Avatar, or the only one that can control all four elements, Earth, Air, Fire, Water. His job is to keep balance in the world and there's one born every generation. Except that he went missing for 100 years and everything went bad. Now he's back and ready to make things right! He's the hero of the story, and that's who my little girl wants to be for Halloween. My daughter is a sword wielding princess or a bad ass martial artist who controls all the elements. Me thinks I must be doing SOMETHING right. So... costume. Right.

I wasn't allowed to shave her head so I improvised with a bald wig cap. The cape I made out of a large circle and I used brown leggings 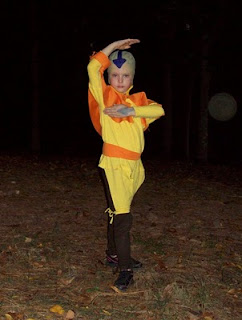 for the basis of the pants. I had this idea of making the body suit out of yellow broadcloth but threw that out the window and hacked up a couple of yellow t-shirts and made it work. The end result was not perfect, but it was better than this piece of overpriced crap. She wore it to church and several of the kids recognized her right off even though the parents were clueless. But the end goal was realized, which is to say both children were very happy and got lots of loots! 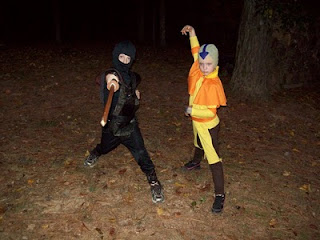 Posted by ladykatza at 7:00 AM