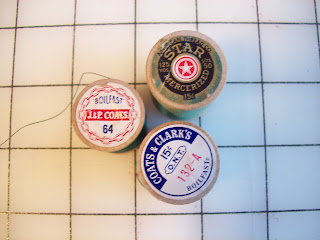 How often do you think about your washing machine? I mean really give it some thought. I bet most people don't until it breaks or they move out of their parents' place and have to haul everything to the laundry mat. Or back to Mom and Dad's for the monthly visit. And maybe we even give it a bit of thought when we have to wash our dedicates by hand in the sink.

It was a couple things that made me start thinking about this history of the washing machine. One was a box of OLD cotton thread Mom gave me. All these bits are on wooden spools and on the stickers it says "boil safe". Boil safe? What? I asked about it and was told "Well, that used to be the only sure way to get your clothes clean. You had to boil the water and then stir them with soap, wring them out by hand".

Oh. My. God. The sheer amount of work involved JUST TO DO LAUNDRY? Just the thought made me cringe and I'm sitting here on my fourth load in to the seven that piled up from handling numerous crises the past few weeks. Could you imagine having to do all that by hand. Uhg. Excuse me while I go hug my washer and dryer for a moment. *HUGS*

So what's the second thing that made me think about our modern washing machines? An old story my Dad told me about when he was a kid growing up on a farm in the late 30's, early 40's. See, it was around this era that the "rural electrification project" was going on. They had offered my great-grandpa $100 to build the power lines through his cow fields. He was no slouch, that man, and instead bargained to have them wire his farm house up for electricity and have it be provided FOR FREE for as long as the family owned the farm. This means they had electric lights but no running water.

This also meant that great-grandma was the first to own an electric washing machine in the entire state of Maryland. It most likely looked something akin to the above contraption. The lack of running water meant that on laundry day all the kids were hauling buckets of water up and down the hill from the well, but they had to steer clear of the machine as it had no safeties. This means anything caught in the gears was likely to be taken clean off, including fingers and limbs. And this was still considered less manual labor than doing it by hand.

When the next generation of washing machines came out wanna guess what one of the major selling points was?

That's right. Safety precautions are being built in, and soon you have the "double tank" machines. You could even boil the water right in the machine. How's that for progress? Makes you really appreciate your washer and dryer, or even the laundry mat, that much more doesn't it?

I highly recommend clicking on the above link and reading through the articles. Among some of the more interesting tidbits was the fact that there is no clear inventor of the original washing machine. I've tried to contact the author of the website and those papers with little luck. Even still, it was obvious the gentleman had put many hours of research and labor to bring us the history of this very under-appreciated invention.

Can you think of any more under-appreciated labor saving inventions in your house?

Addendum: After a little more digging I also discovered there is a big link between the electric sewing and washing machines and the Women's Liberation movement.
Posted by ladykatza at 10:30 AM