So I'm on a mailing list that tells me all the different estate sales and auctions going on in the Metro Atlanta area.  Lately I've been ignoring them, but for whatever reason I opened this one up and decided to poke around.  Low and behold one of them said "lots of sewing stuff" including a "really nice sewing machine".  So I looked through the photos and for the life of me didn't see a sewing machine. But they did have this serger.  Then it dawned on me that whomever was running the estate sale had absolutely no idea what they were selling.  So I spied the model number from the photo, did some research, and discovered its a really nice serger that retails at $1400-$1700 AND HAS A COVERSTITCH!!

Oh hell yeah.  Now, we're cash poor cause we just paid bills but I had a bit of 'mad money' left in my personal savings.  I decided to check it out since it was super close to me, too.  I don't know what I was expecting them to have it priced at, but when I saw they had it for $99 that baby was out the door with me in a heartbeat. That's less than half what I was willing to pay for it.  Now, it has some parts missing, like the blade cover and the standard serger foot, but those are only going to cost me another $50 or so.  And I did try to get the cover stitch to work and was having a great deal of difficulty.  I figure if i need service and the parts I'm STILL coming out more than a thousand dollars ahead! HELL YEAH!  Eat my deal finding dust, suckas! 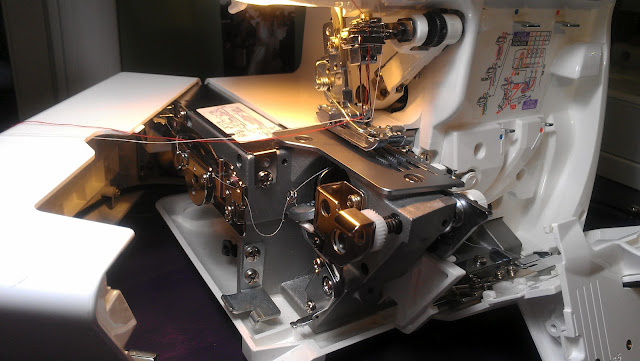 Still, this thing is going to take some learnin'. Its a  bloody complicated machine, yo.
Posted by ladykatza at 11:41 PM