A Slice of Life

Hi everyone.  It seems there's quite a bit going on in Katza Land these days.  Some of it good, some of it not so good. And some sewing, but that I'm saving for last, so if you aren't in the mood for personal updates skip to the bottom half.

The not so good first?  Well,  our main car is currently in the shop getting an engine overhaul that hit us in the wallet pretty hard.  And one of my best friends had a miscarriage, and what really sucked is I was at work with no backup and couldn't drop everything and be there physically. She was barely eight weeks, so small blessings, I guess.  And its mother's day, which means I'm feeling sad.

But Happy Mother's Day to all of you moms that read my blog!

Good news! Well, I was able to go to my son's presentation for his advanced class. They had teams of three build and program a robot. They did really well! Felicity was quite envious so used Simon's physics kit to build one at home.   Then they had their blue belt tests this weekend.  I managed to make it to the test and get photos, though I was running on sheer willpower having been up for almost 22 hours by that point. PHEW.


Sewing!! I finally got around to it the last night of my weekend.  I spent the other nights cleaning and doing food prep.  Our CSA is keeping me in vegetables, that's for sure!  I'm making another Vogue 8470, but its a sleeveless maxi version.  Nine yards of ruffle to the bottom of a circle skirt! That's a lot of pinning and fussing, let me tell you. The dress itself is from a very light weight flannel in a blue/white gingham. Its deliciously soft and airy, but the loose weave makes it 'grow' so to speak.  What started out as matching patterns often ended up going wonky on me.  Below is photo evidence of the dodgy pattern matching.  I did try, I swear. 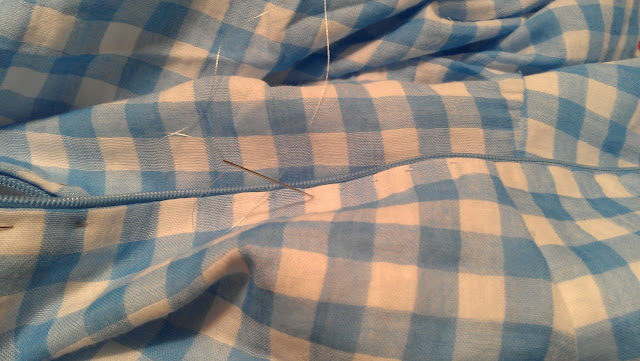 I decided the easiest way to get the zipper in was by hand.  I never thought I'd say this, but the sewing details by hand are calming.

There was suppose to be a bias facing for this, but I decided to just fold and iron the seam allowance and do a tiny top-stitch.


And now for the ones that DID come out just right. The center front!  Everyone stares at that spot anyway.


And the right side seam. Hello gorgeous! 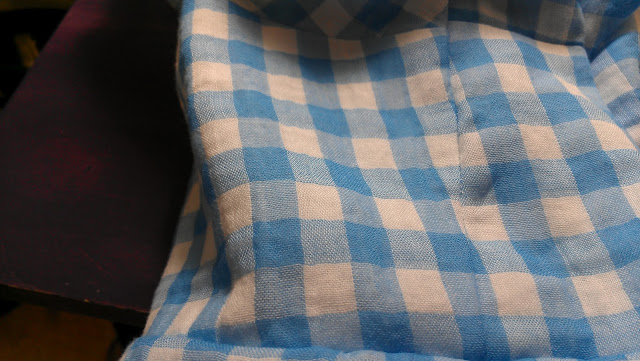 That's it for  now. All I have to do is sew the ruffle on the bottom and I'll be done!  But first, a long work week. Leh Sigh.
Posted by ladykatza at 7:26 PM