In Which I use ALL the Machines!

Ok, first up, all give-a-ways are now closed!  I shall be rolling for the winners this weekend.  Also up for this weekend? Trying to finish the last of my knits that I cut out over a month ago, making my kids' beach outfits, and oh.. I dunno,  taking photos of all the outfits somewhere in there.

I might just pack all the un-blogged items  and take the photos at Jekyll Island, but that might be considered blogger cruelty.  HAHAHA.  Seriously, make this vacation get here or I might be on the news for all the wrong reasons. *ahem* Anyway.  So what's on my sewing table? Well, for starters, this:

See those little green bobbins?  Cute right? They go to my Mom's Viking (not pictured yet) and its a great machine, except I can't get it to wind a bobbin worth a tinker's damn. All the nicely wound bobbins in that box were done by Mom herself.  The one sticking up overfull and wonky?  Yeah... my attempt.  I've read the instructions multiple times and its just not working, and its not like I have an afterlife directory.  "Hello, Peter, yes please connect me to my Mom, I have an urgent sewing matter."   And quiji boards and seances are right out of the question too, so I had the brilliant idea to try and use my Brother to wind the bobbin.


Small problem... they don't fit on the Brother bobbin winder.   Well crap. I know, I'll buy a Sidewinder!!  New problem... you have to get the DELUXE version for them to fit Viking bobbins. Which costs $66 instead of $26 dollars.  I think its a conspiracy against vikings. I mean the sewing machine, not my ancestral history.  Nobody pisses off those kind of Vikings, but I digress.  The whole reason I was going to use Mom's machine in the first place is because I just had it serviced and mine needs to go in the shop for some TLC.  Plan C, hook my machine back up and take over the kitchen table with the Bernina cover stitch machine.

Yes, I used all three machines. I'm just a few illegal immigrants short of a sweat shop. *badumdum TISSS*   So for those of you asking, no I'm not giving up the old serger because I've discovered having both is very convenient.  I have finally gotten the hang of making the cover stitch work on this machine, mostly.  You do have to fiddle with tension settings when changing fabrics.  The vaguely Asian looking knit below is being used to make Simplicity 2369 view A. The photo is the back side of the knit, its black and red on the correct side and a very yummy feeling microfiber knit. Unfortunately, its probably a polyester of some sort and won't breath well. Bad for outdoors in our insanely hot and humid weather, great for work.


The reason for the cover stitch machine was to finish the hems on another dress from Vogue 8679. The hem turned out lovely, but the photo is really dark. 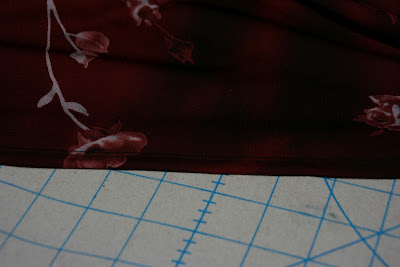 I then went to do a finishing stitch on the Simplicity dress front wrap piece and sewed it  wrong, not once, not twice, but THREE TIMES.  Coverstich seam ripping will make you want to rip your own hair out.  The fourth time was passable and I said "to hell with that" and left it.  No photo, at this point my son was awake, playing video games (his natural state) and asked "Are you yelling at me?"
"No, I'm yelling at inanimate objects".
"Oh good, glad to see you are feeling better",  (its been a bad couple of weeks) he says.  So yelling at inanimate objects is considered an improvement over the last few weeks.  This is why I need a real vacation, ya'll.  I'll also accept care packages of chocolate and vodka cocktails. But not molotov cocktails, those are illegal and make the postal workers crankier than me.

So, anyone else have seam ripping nightmares to share?? What's your favorite cocktail?
Posted by ladykatza at 1:24 AM