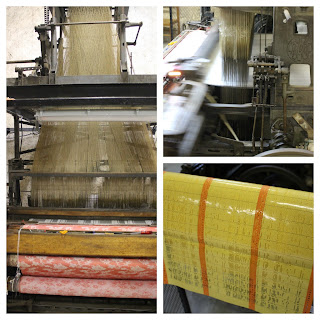 Donna from Nid de Tissus wrote a fascinating post about visiting a silk worm farm, or rather a museum.  Go check it out! Then come back cause it posed an interesting question for me.

Now, I know people who find the process of making silk to be cruel because you have to boil the silk worms in their cocoon to get the end product. I would like to put a bit of a different spin on it though.  If these worms didn't produce such a lovely fabric would humans have bothered to keep them alive for thousands of years?  Would they have, instead, been eradicated as pests?  Maybe the very thing we kill them for is what has allowed the species to survive.  I would love to hear everyone's thought on this.
Posted by ladykatza at 7:36 PM